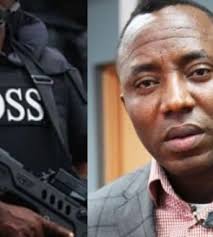 The Department of State Services has released rights activist and presidential candidate of the African Action Congress in the February 2019 general elections , Mr . Omoyele Sowore and his co – detainee , Adebayo Bakare.

They were freed hours after Justice Ijeoma Ojukwu of the Federal High Court in Abuja had given the DSS 24 -hour ultimatum to release the two men .

Their lead defence counsel, Mr . Femi Falana (SAN ), confirmed this development to our Newsmen on Thursday .

He said they were released about 7 pm on Thursday .

He also said that the agency had paid the sum of N100 , 000 awarded against it by Justice Ojukwu for making the court to adjourn till Friday for frivolous reasons on Thursday .

The two men , who are now being prosecuted by the Federal Government on charges of treasonable felony , were arrested in August over their call for ‘ Revolution ’ protest against what they described as “bad governance . ”

But the had DSS continued to hold them in custody despite separate court orders ordering their release .

It came to a head on Thursday when the judge , who frowned at the conduct of the DSS , issued a fresh order directing the agency to release them within 24 hours .

Earlier in the day , a group of half -naked women from Sowore ’ s birthplace in Kiribo , Ese – Odo Local Government Area of Ondo State , had stormed the Federal High Court , Abuja , to protest the continued illegal detention of their son by the DSS .

Most of the women , numbering about 30 , were decked in white wrappers and bra , but with no clothes covering the rest of the upper parts of their bodies .