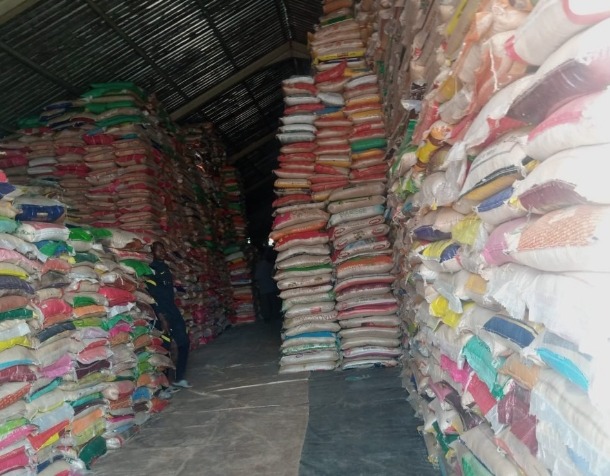 The trucks were loaded with bags of smuggled foreign rice at the time they were intercepted.

DAILY POST reports that the trucks have Dangote Cement logo clearly inscribed on them.

One of the trucks has the registration number, ICT-17F-014, while the other was unmarked. 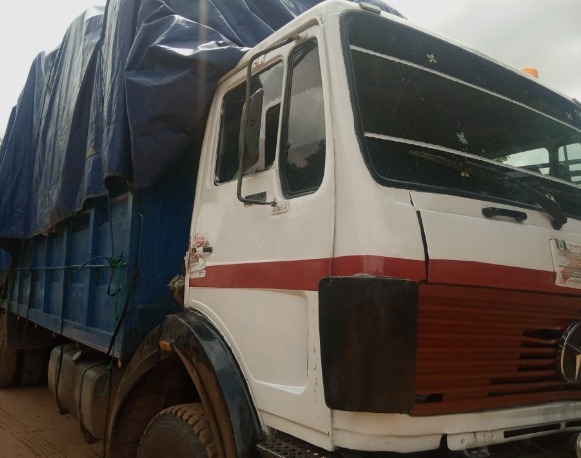 Addressing newsmen at the command’s headquarters in Idiroko border, the Controller, Bamidele Makinde, said he could not confirm whether or not the trucks belong to Dangote Cement, saying most of owners of the trucks might be franchisees of the factory.

Makinde said that each of the two trucks were conveying 882 bags of 50kg foreign parboiled rice along Abeokuta axis when his officers stopped them. 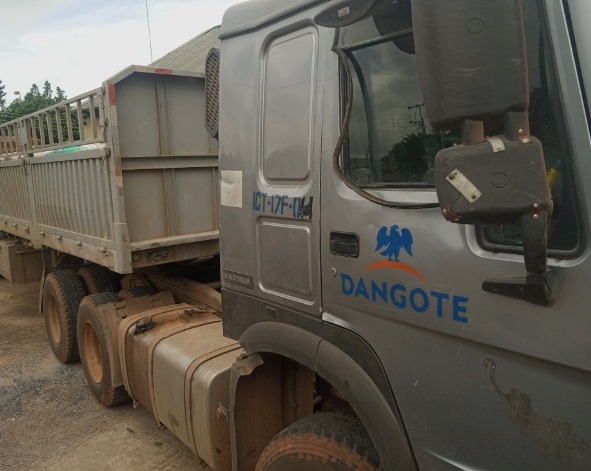 He disclosed that the command generated a total sum of N12,818,181 from importation and auction sales of petrol intercepted at different locations and exit points to the Republic of Benin during its anti-smuggling operations.

Also, a tanker containing 45,000 litres of adulterated diesel was also impounded from a suspected bunker.

It was said that illicit drugs and narcotics worth N221,820,820 were intercepted by the command. 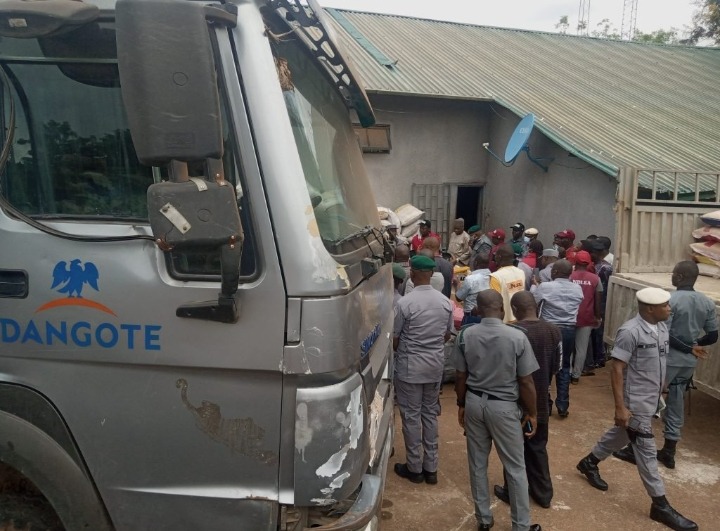 “The cumulative estimated Duty Paid Value (DPV) of all the seizures between the month of May and June, 2022 amounts to One Billion, Two Hundred and Ninety Million, One Hundred and Eight Thousand, Six Hundred and Eight Naira, Zero Kobo only (N1,290,108,608.00),” Makinde said. 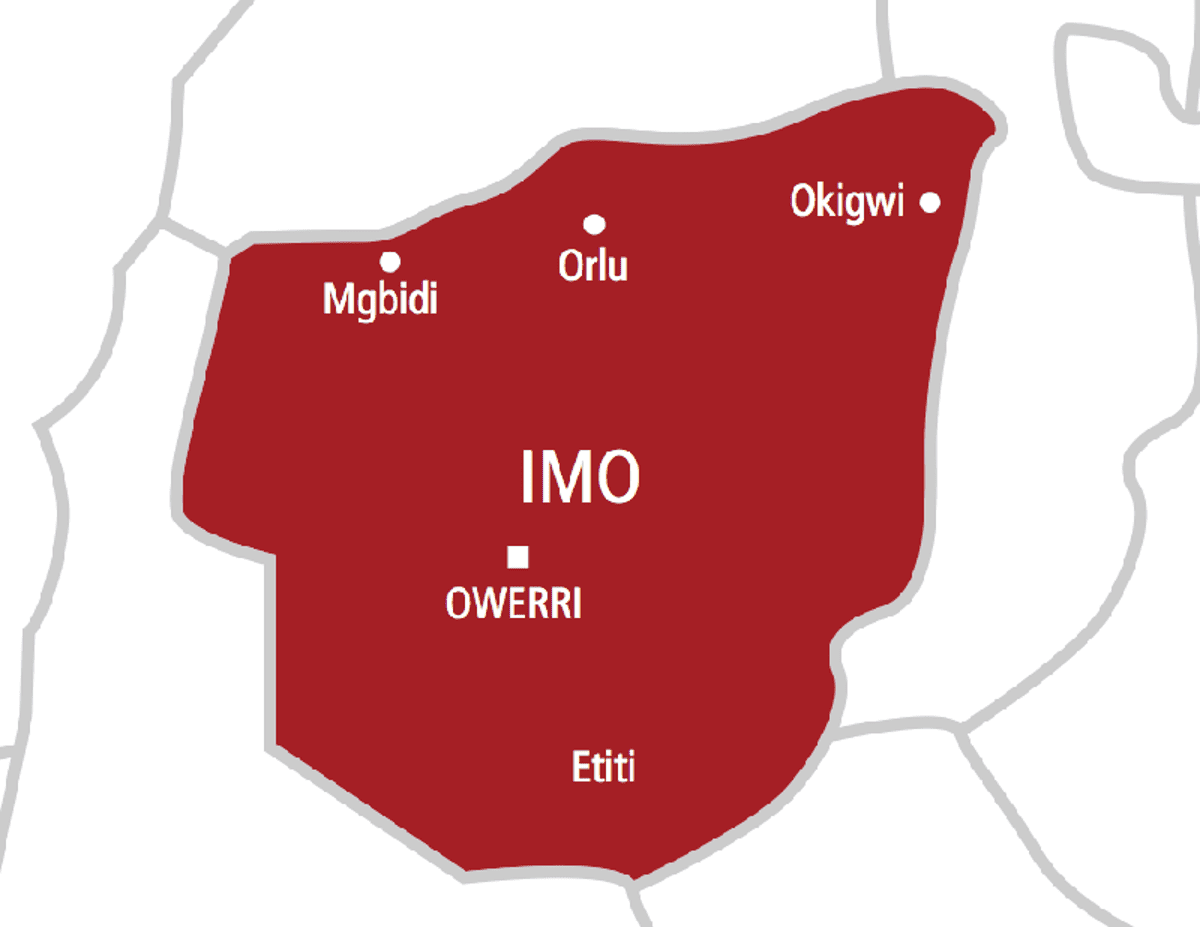 There was panic at Ogbaku market on Owerri- Onitsha Road in Owerri, Imo State, on Tuesday as gunmen invaded the market and shot a motorcyclist dead.

This happened while the Inspector General of Police, Usman Alkali, was in at the Government House Owerri to inaugurate the 12 Armoured Personnel Carriers procured by the state government to fight banditry in the state.

Sources at the market told our correspondent that the gunmen who struck operated in a sienna vehicle and came from Oguta Road.

On reaching the market, one of the sources who doesn’t want to be mentioned said that the gunmen identified their target and ordered him to enter their vehicle but he refused.

The source said, “The man they killed is an Okada rider. They came in a sienna vehicle from Oguta Road. On reaching the market, they identified the Okada man called Chima and ordered him to join them in their vehicle.

“The Okada man refused. They told him three times, but he insisted. They got infuriated and shot him three times, and he died on the spot before they drove off. They also shot in the air while zooming off.”

The Secretary General of Ogbaku Youth Association, Justice Nwafor, who confirmed the killing to our correspondent, said that the remains of the victims had been evacuated from the scene.

He also told our correspondent that the youth body had reported the incident to the Ogbaku Divisional police headquarters and that the deceased’s motorcycle had been taken to the police station.

The spokesperson for the police in the state, Micheal Abattam, had yet to respond to an inquiry concerning the incident.

A man simply identified as Chima and his female lover have reportedly hacked the man’s wife with a machete in Omerelu community, Ikwerre Local Government Area of Rivers State.

It was gathered that trouble started when the man’s wife identified as Nwakaego confronted him for bringing his female lover into their home on Monday.

The man was said to have fled after realising the enormity of his actions, as blood stains were all over the house.

Elder brother to the battered woman, Anayo Warisi, while speaking with newsmen in Port Harcourt said his in-law and his lover attacked his sister, while the man used a machete freely on his wife.

Warisi said his sister was seriously injured, especially on her leg due to the matchete cuts inflicted on her and was rushed to the hospital.

He said, “It was this morning (Monday) my sister’s husband brought another woman to their house. So she asked him why he did that. Him and his lover started beating her sriously.

“Then he cut her all over her body with the matchete, but her leg is worse. My elder ones took her to hospital in Elele, but she was rejected there that the injury is much.

“So, they moved her to the University of Port Harcourt Teaching Hospital (UPTH) where she is now.

“We want the husband arrested because it is a case of attempted murder. Nobody knows what will happen next if we allow it to lie low. So let justice be served.”

Meanwhile, a group, the Centre for Basic Rights Protection and Accountability Campaign has called for a thorough investigation into the incident.

Secretary of the body in Rivers State, Gladys Oyenmwen, said anyone who is found culpable should be made to face the law.

She said “Domestic violence under any guise has no place in our society and should not be condoned irrespective of who is involved.

“So, we demand a thorough investigation into the allegations, and anyone found culpable should be prosecuted to serve as a deterrent to others.”

The spokesperson for the Rivers State Police Command, Grace Iringe Koko, confirmed the incident, saying the fleeing man’s lover had been arrested.

“The woman has been arrested, and the case has been transferred to the State Criminal Intelligence and Investigation Department,” she said.

Asked about the man’s whereabouts, Iringe-Koko, a Superintendent of Police, said an investigation was on, and everyone is in top gear to ensure he is arrested.

A sex worker, identified simply as Ms. Confidence, has been found dead inside her room in a popular brothel in Ughelli, Ughelli North Local Government Area of Delta State.

The lady was reportedly discovered stabbed and strangled to death by yet to be identified assailant.

It was gathered that the lifeless body of the lady was found inside her room in the brothel after she failed to show up to join her colleagues to scout for customers.

It was gathered that the incident which occurred last Thursday has since triggered commotion in the locality as the panic-stricken colleagues of the deceased were said to have fled the area.

One of the sources told newsmen that “her colleagues were waiting for her outside as they were looking for customers but they didn’t see her”.

“They now went to knock at her door and it was when they opened the door that they found her dead in her room.”

When contacted, the Police Public Relations Officer for Delta State Command, DSP Bright Edafe, confirmed the incident saying, “she was stabbed in the stomach and strangled.”

While noting that no arrest had so far been made in the matter, the PPRO affirmed that the police had commenced an investigation into the incident.