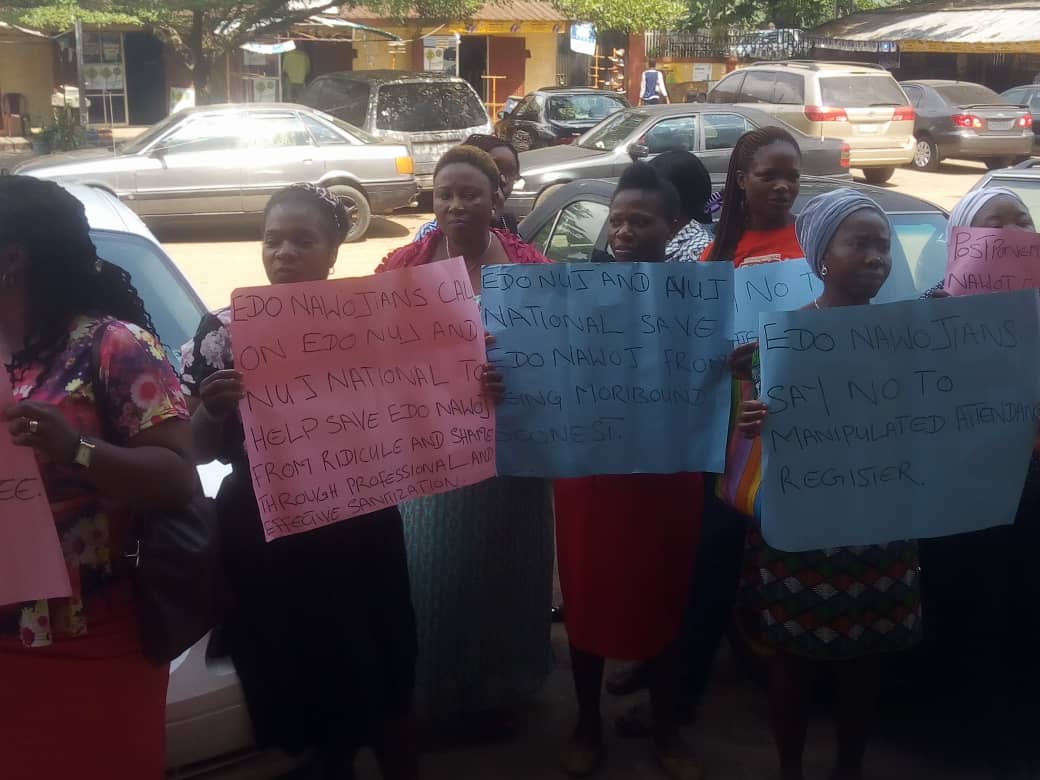 …Say Attendance Sheet Being Manipulated To Disqualify Some Contestants

National Association of Women Journalists (NAWOJ), Edo State council, Wednesday, said members who do not have the minmum qualification of Ordinary National Diploma (OND) as enshrined in the Nigeria Union of Journalists (NUJ) constitution are not qualify to contest in the forthcoming election.

They also raised an alarm that some well connected persons are planning to use attendance register of the Association’s past congresses to disqualify some qualified contestants, saying, “the attendance they are presenting in this NUWOJ election is even photocopy and this photocopy rigister is even not complete.

The aggrieved members who protested around the premises of Nigeria Union Journalists, with placards containing inscriptions as: ‘Edo NAWOJIANS say no to compromised caretaker committee’, ‘Edo NAWOJIANS say no to manipulated attendance register’, ‘Edo NAWOJIANS call on Edo NUJ and NUJ national to help save Edo NAWOJ from redicule and shame through professional and effective sanitisation’, etc, vowed that illegality and injustice would not be allowed in the forthcoming NAWOJ election.

Speaking through Joy Musa, they said the attendance rigister being emphasised as cretaria for contesting the election was not complete, saying photocopy was presented rather than the original copy which according to them is more reliable and authentic.

She said most of the congresses held in the past dispensation was on ground of emergency, and that members were informed less than 24 hours, stressing that the immediate past secretary then failed to perform her duty.

“You are aware it is the notice board we use in dissemination of information including announcement of congress, but unfortunately we’ve never used it in the past three years in NAWOJ because the secretary then failed to perform her duty and and they want to use this attendance to disqualify some qualified members, this is what we will not accept”, she added.

She disclosed that when the aspirants met with the Caretaker Committee, it was discovered that the attendance register being emphasised on does not have date, stressing that NECO certificate has no place in the practice of journalism.

“She never wrote a single exam at IIJ. Now, we have heard that she has written petition to Abuja that she has written all her exams and that she is waiting for her result and convocation, is that allowed in anywhere? Illegality will not be allowed in Edo NAWOJ. If that is allowed, I can go to Emaguero college to bring primary 5 pupil to contest the secretary position of Edo NAWOJ.

“We don’t want someone who does not have first degree, ND, HND but ‘certificate less’ to come and lead us in Edo NAWOJ. We will not allow it; it is an abberation. Manipulation of attendance to suit certain persons will not be allowed in this election. Somebody who do not have result, coming from the back door to contest election will not be allowed. What is right should be done by the NUJ, we are seeking for justice”, she requested 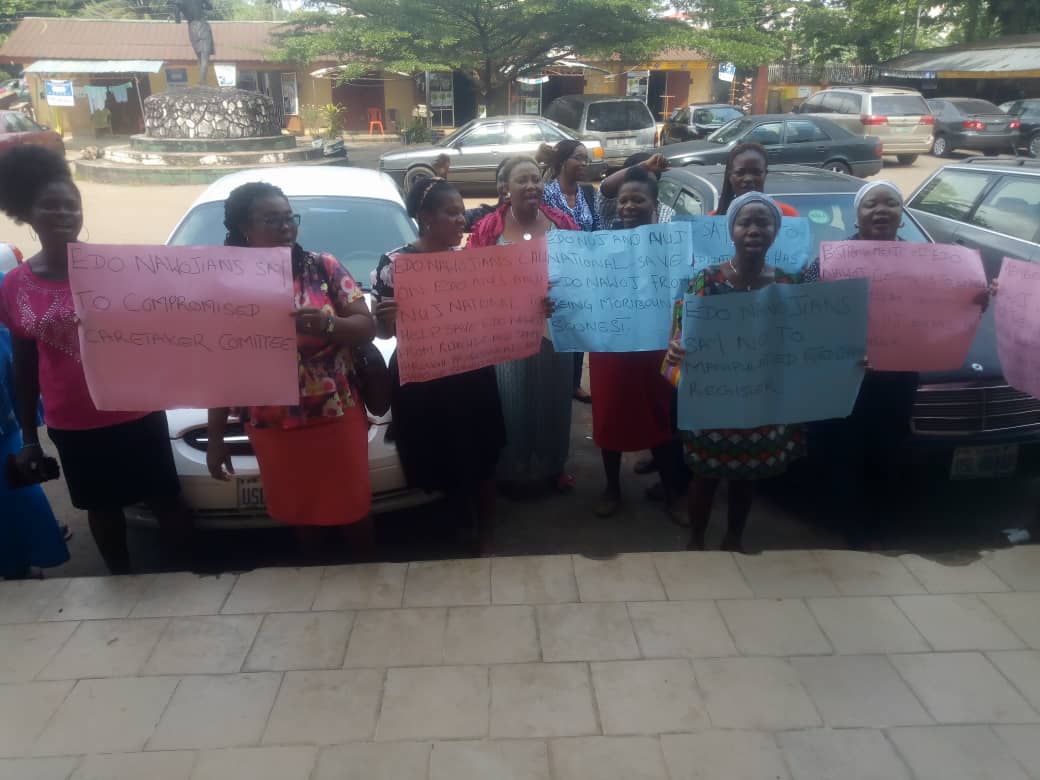 Members of the Edo NAWOJ on protest today in Benin City

Also buttressing Musa’s point, Amina Ebor, called on Edo NUJ and NUJ national body to salvage Edo NAWOJ from quackery, stressing that the NUJ constitution is there as guide and should not be slaughtered on the alter of illegality and favouritism.

Responding on behalf of Edo State NUJ, Secretary of the Council, Mr. Titus Akhigbe, assured the members that all their complaints would be attended to by leadership of the Union.

He noted that to this effect, the election slated for Friday has been shifted untill all lingering issues have been resolved.