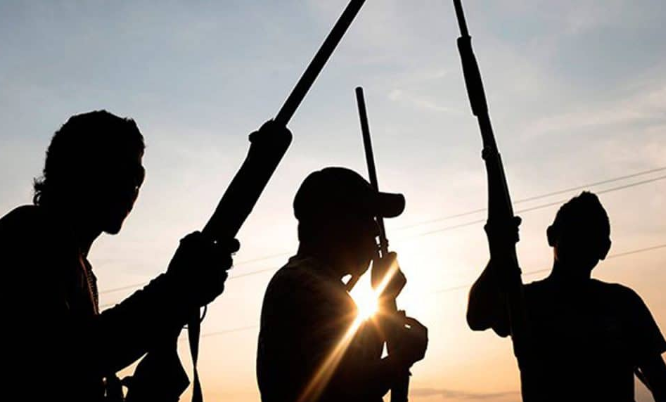 The Divisional Police Officer (DPO) of Igarra Police Station in Akoko-Edo Local Government Area of Edo State, Suleiman Muhammed has been reportedly short by suspected kidnappers along the Auchi-Igarra-Ibillo road.

The incident reportedly happened on Tuesday a few metres before Sasaro around 7:00pm.

The incident reportedly led to commuters stranded until the local vigilante group went to evacuate the seriously injured officer whose assailants were said to have thought he was dead and cleared the road.

Narrating the incident on Wednesday, a member of the vigilante group from Igarra said the DPO was shot in the eyes, arm and stomach, adding that he may have been shot with AK-47 as they recovered bullets and other cartridges from the scene of the attack.

He said, “The DPO had earlier called us in the morning to a place where they said some suspected yahoo boys constituted a nuisance, then later around 3:00pm, he told us that these suspected kidnappers were blocking the road, so we went there and chased them away.

“I was told that later in the evening after inspecting the change of guard, the DPO proceeded in his Toyota Camry car to Auchi where his family resides. The people laid ambush after the MTN Mast, near Sasaro, and shot him severally, I believe they thought he was dead and then abandoned him.

“Their gunshots made motorists going to Auchi and coming from Auchi to stop until we arrived at the scene in company of the police to rush the DPO to the hospital. He was bleeding profusely because he was shot in the eyes, arm and stomach; after stabilizing him, he was rushed to Irrua Specialist Teaching Hospital.

“This morning (Wednesday) I and my boys went back to the scene and we recovered used bullets including those of AK 47 and cartridges.”

Another leader of the vigilante attributed the rising presence of kidnappers in that axis to a community along that road who has been accused of renting part of its land to herdsmen for grazing.

The Police Public Relations Officer of the Edo State Command, Kontongs Bello was said to be on an official assignment out of the state but sources at the command said they are awaiting official details of the incident.

Police Arrest Landlady After Tenant Dies During Scuffle Over Pot 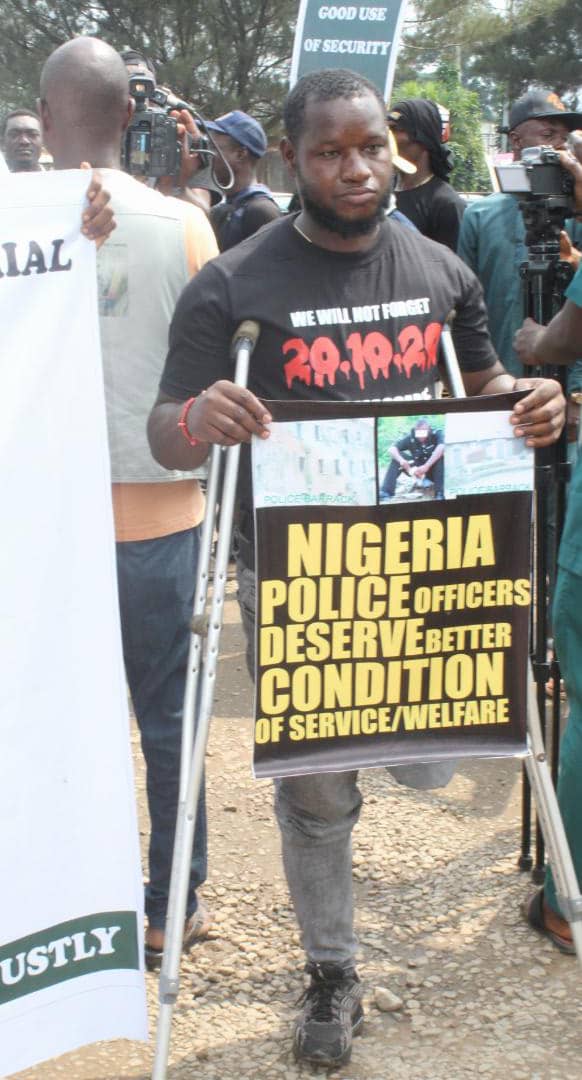 Youths mostly drawn from the civil society organistions in Edo State on Wednesday joined their counterparts across the country to mark one year memorial of EndSARS protest of which some youths lost their lives.

The protest which lasted for over two weeks last year, however, turned bloody on 20th of October when security operatives reportedly opened fire on them in their large numbers at Lekki Tollgate, Lagos, where they had gathered to protest against police brutality, bad governance etc.

Scores were reportedly killed in the process while others were taken to detention by the security agents, as quite a number of police stations and other buildings and properties belonging to security agents were burnt and destroyed.

Speaking at the protest ground which held at Benin Museum Park, Oba Ovoramwem Square (Ring Road), one of the protesters, Comrade Kelly Okunbo said one year after the protest nothing has been done.

Okunbo who demanded for the release of those who are still in police detention as a result of the protest, lamented that almost a year after a panel was set up to look into what led to the protest and people that fell victims, not a single implementation has been made to recommendations made by the Edo State Judicial Panel of Enquiry. 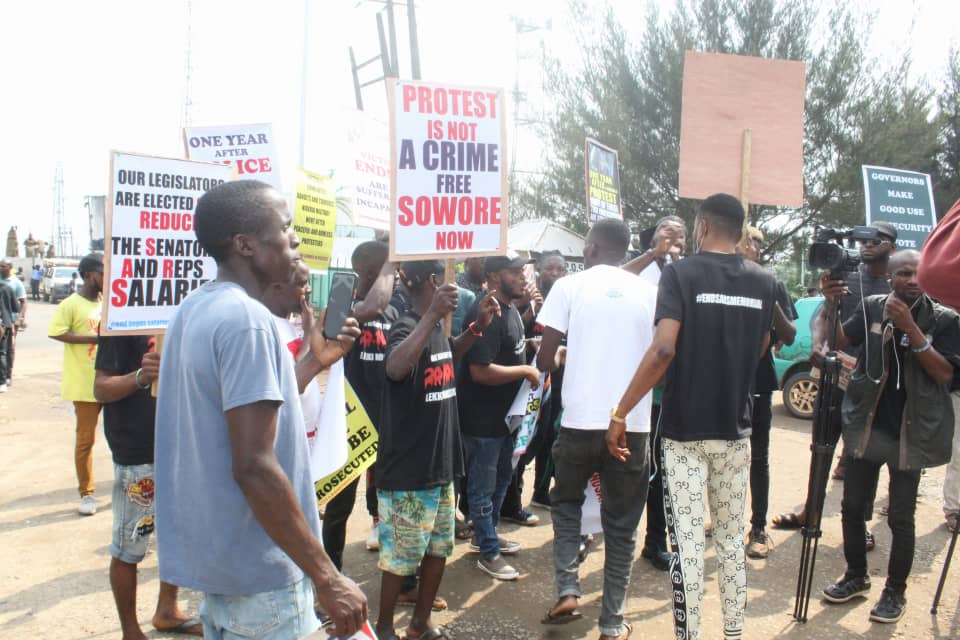 Also speaking, Asekhame Stephen Ohimai, said he was at the panel with his lawyer to make his submissions and demands but unfortunately nothing has been done.

The graduate of Auchi Polytechnic who is about going for the compulsory one National Youth Service Corps, said himself and other students of the institution were out protesting when men of the Nigerian Army rammed into them and started shooting sporadically of which he received a stray bullet at where he ran to hide, adding that this led to amputation of his leg.

He narrated: “I came out to join others who were protesting against police brutality and bad governance on the 19th of October when Nigerian Army rammed into our midst and started shooting sporadically, and I ran to hide in place for safety but stray bullet hits my leg and I was rushed to the hospital where I was recommended for amputation. The Doctor Said without amputation, I will not survive, so my leg was amputated. Many persons were killed in that scene. 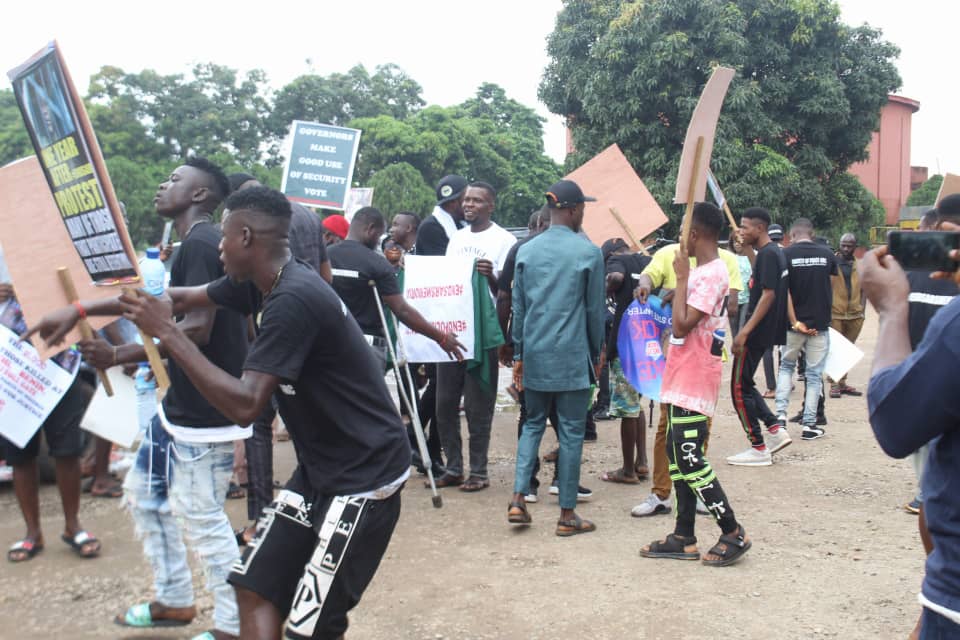 “I’m going for youth service now. I want government to provide me job because all the things I was running up and down to do before, I can’t do them. So, the government should help me. My lawyer and I were at the panel and made our presentation, but I have not seen anything.”

Another victim, Miracles Ailenokhoriah, who is still in wheelchair as a result of injuries he sustained from police bullet said he was shot last by a police man during the protest at Ekpoma, Edo State, adding that the policemen who brutalised him threatened to beat him to death and that they further threatened to bury him in a shallow grave should he die as a result of the brutality.

A pharmacist who joined the protest with his medical apron, Pharmacist Clinton Ojo-Edokpayi demanded for the release of his pharmacist colleague, Pharm. Solomon Akume, whom according to him was arrested last year after twitting against Buhari.

“Pharmacist Solomon Akume was arrest last year by DSS during the protest after he twitted that the life of President Muhammadu Buhari is no worth than the live of any Nigeria. He was traced and arrested for that twit, and since then he has not been released. I am here to say Akume and other Nigerians in detention should be released,” he demanded. 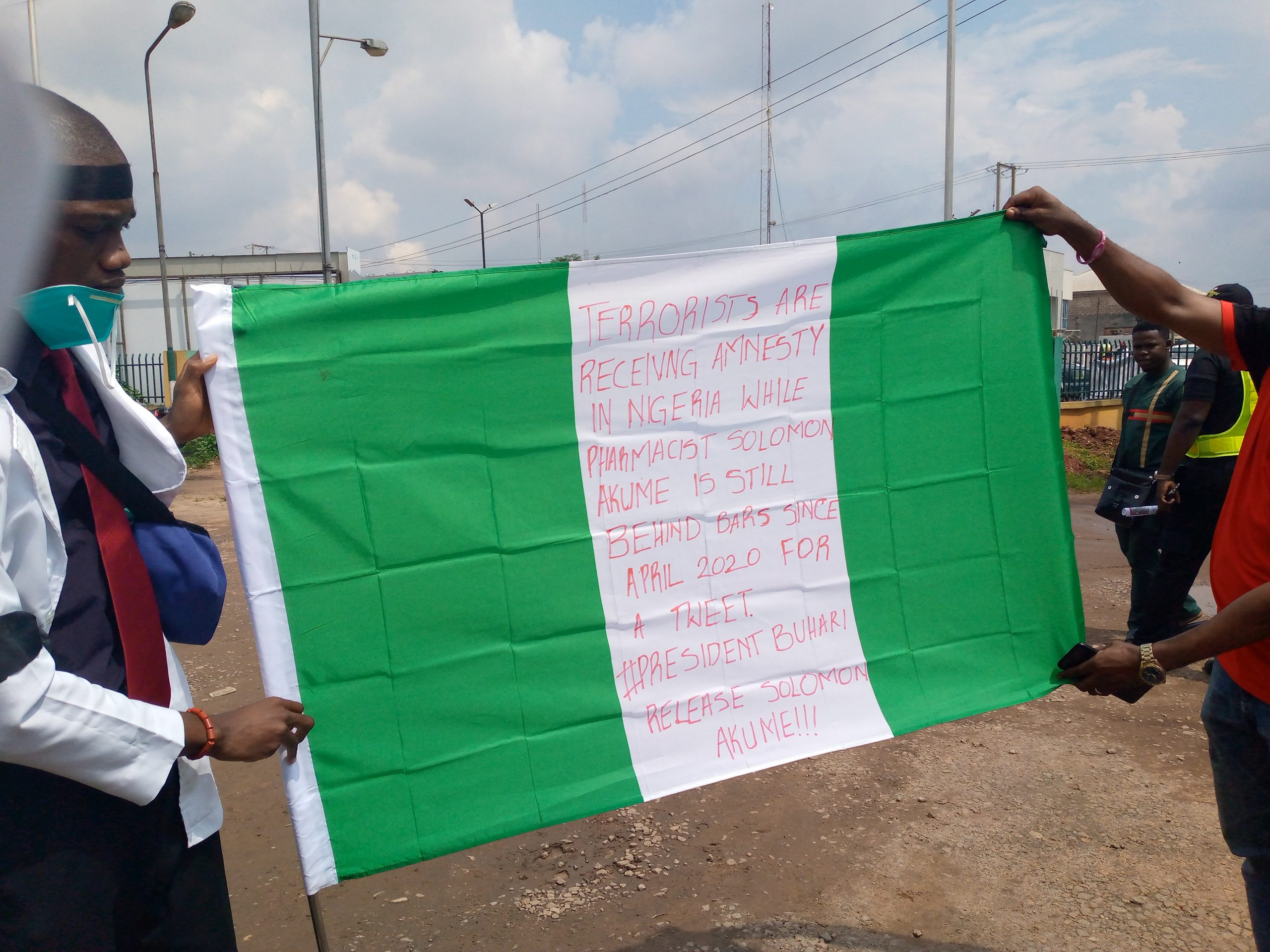 As the time of filing this report, the compined security operatives were strategically positioned at major routes that lead to the park, centre of Benin City.

No fewer than nine routes from different parts of the city link to the Museum Park.

At the main entrance to the Museum Park (Forestry Route), four security Hilux were parked at the time of filing this report.

Meanwhile there was mild drama at the entrance of the Museum Park that could have led to infraction between security operatives especially the local vigilantes and members of the civil society organistions but was averted by a senior police officer’s intervention who pleaded for a calm.

Trouble started when one of the CSO members was about driving into the Museum Park but was stopped by one of the local vigilantes who closed the gate and requested the occupants to come down from the vehicle.

This angered the CSO member who came down from the vehicle and was almost exchanging blows with the local vigilante man.

He was irked by vigilante’s request because the person inside the car of whom the vigilante asked to come down is a victim of EndSARS.

He was reportedly amputated after security operatives reportedly rammed into him and others during the protest last year in Auchi, Edo State. 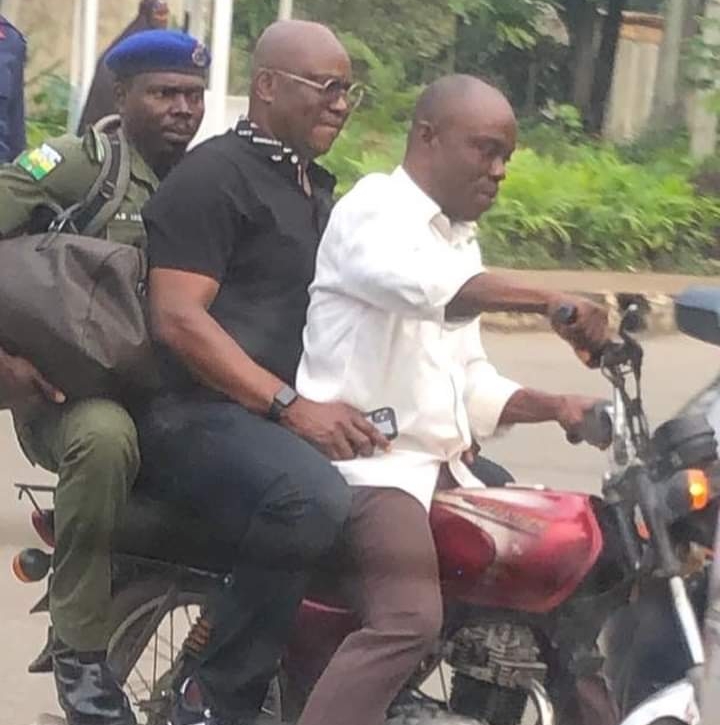 Former Governor Ago Fayose of Ekiti State, on Tuesday, left his car to commute on a commercial motorcycle, popularly known as Okada, in Ikeja, the Lagos State capital.

Fayose took the decision as a result of the hectic Lagos road traffic, which he said is no respecter of anybody.

In a post on his social media handle, the former Governor was seen on the motorcycle with his security aide sitting behind him.

Taking the bike, according to Fayose, became necessary to prevent missing his flight.

“Lagos traffic is no respecter of anyone. I had to take Okada in Ikeja to avoid missing my flight,” he said in the post. 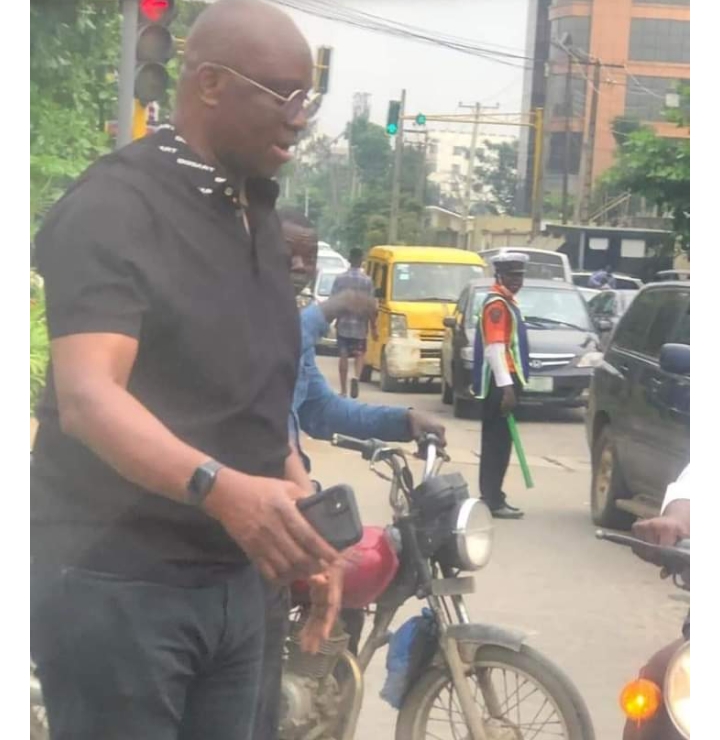