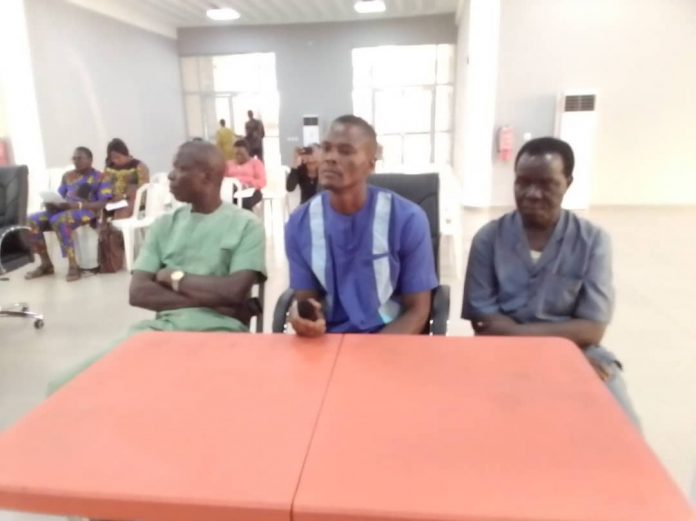 A 41-year-old Smart Odojie Ofagba, the Edo State Judicial Panel of Inquiry for victims of SARS and related abuses appealed to the panel to unravel the circumstances surrounding the death of his father, uncle, labourer, just as he demanded N50million compensation.

Narrating how his father, a retired army officer, Mr. Samuel Udojie Ofagba, was allegedly murdered by one Divisional Police Officer, Aisabor in Usenu Irrua in Esan Central Local Government Area of Edo State in March 9, 1999, Ofagba also told the panel that his uncle, Mr. Abhulimen Ofagba and his father’s labourer, Kingsley were allegedly murdered alongside his father by the same police officer.

Mr. Smart who said he was 20 years old when the incident happened, told the panel that one Kingsley who works with his father in his farm was accosted by the police officer when he was coming from a night burial and was taken to his father (Mr. Samuel Udojie Ofagba) for identification.

He said when his father saw Kingsley, he identified him as one of his workers.

Narrating his experience further, he said his father (now deceased) asked Mr. Kingsley, the labourer what brought him to his house that early morning in his native language but was stopped by the police man for conversing in his tribe instead of English language that everyone could understand.

“So, the said police officer made an attempt to slap my father (now deceased) but he quickly held his hand and that one argument further led to the other which eventually landed them at the police station”, he said.

Smart said, his father, uncle and his father’s labourer were kept behind the counter and were told to come and bail themselves with the sum of N 40, 000 adding that they were only able to raise the sum of N 23,000 which the police allegedly rejected.

He said he was later told by the Investigative Police Officer to come back the following day to see the DPO since it was already late in the day only for them to hear that they have been shot dead and their bodies dumped at the Irrua Police Division and labelled “armed robbers” by the DPO.

Smart explained that the police claimed that they engaged them in a shoot out with his men at Ewu junction, Irrua, and the police proceeded to produce a cut to size locally made barrel gun and 10 live cartridges alleged to have belonged to his late father and uncle.

He noted that to make the matter worse, their bodies were not released to the family for burial.

Smart prayed the panel to compel Mr. Aisabor to lead him to where his father was buried so that he could exhume him and give him a befitting burial.

He also asked for the prosecution of officers who were remotely involved in the killings of his father, uncle and his father’s labourer.

He further sought for a public apology from the Nigeria Police Force for defaming his father, uncle and his father’s labourer.

Chairman of the panel, Justice Ada Ehigiamusoe (rtd), upon listening to the petitioner, ordered that the said Aisabor be summoned before the panel.

“This is the collective view of the panel that the said police officer named in the petition, one Mr. Aisabor be summoned before this panel to answer to issues as contained in the petition”, Justice Ada said.

Judiciary
A victim of the violence protest which erupted during the ENDSARS, Mr. Pius Ebhodaghe, whose truck was burnt, Wednesday approached the Edo State Judicial...