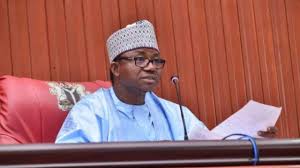 He alleged that this they plan to excecute in connivance with the alleged suspended Deputy Speaker of the House who recently publicly declared support for the governship candidate of the APC, Pastor Ize-Iyamu.

The Speaker, in a press conference said the “planned action is akin to lighting a match in an already tensed political environment, which according to him its conflagration is capable of causing crisis in the state.”

He continues, ” The state’s polity is already heated by the high political tension from electioneering campaigns. Their planned action is akin to lighting a match in an already tensed political environment, which conflagration is capable of causing crisis in the state, and of a scale beyond our imagination.”

Okiye, on behalf other members called on President Muhammadu Buhari to call the Governor and others allegedly working with him to execute the plan to desist and allow the law to prevail.

The Speaker also called on Edo people to rise against this alleged attack and plot to subvert their will and subjugate them using external forces.

He said, ” We call on President of the Federal Republic of Nigeria, Muhammadu Buhari, and the Presidency to urgently call this governor and others working with him to execute this illegal plan to desist and allow the laws of the state to guide them.

” We call on Edo people whose mandate and interest the state’s legislature holds and protect, to rise against this planned attack and plot to subvert their will and subjugate them using external forces.

” We urge lovers of democracy across the world institutions that hold democratic tenets and values, pro-democracy groups to denounce this planned illegality that seeks to distract a duly constituted authority.”

However, reacting to the allegations, the Commissioner for Special Projects of Imo State, Mr Simon Ebegbulem said the allegations are baseless, and nonsensical.

While wondering why Uzodinma should be dragged to the political problem of Edo State, the Commissioner noted that the governor is interested in working with other APC stakeholders in reclaiming Edo State which according to him, has been APC state.

“The illegal Speaker and his governor are not making sense to me with this baseless allegation. I don’t even know what they are talking about because there is no House of Assembly in Edo state. I think that is why the so-called Speaker is running away from his shadow like a criminal that will always run once he sees a law enforcement agent.

” However, I don’t know why he should draw the leg of His Excellency, Governor Hope Uzodinma into his political problems. My Governor is interested in working with other APC governors and stakeholders to reclaim Edo State which has been an APC state before Governor Obaseki donated it to the PDP.

” The illegal Speaker and his principal is already jittery because of the imminent defeat in the coming election. You can see that his aides are resigning every day including his Deputy Speaker. Now he is left with five lawmakers and does that show that he is in charge?,” Simon questioned.