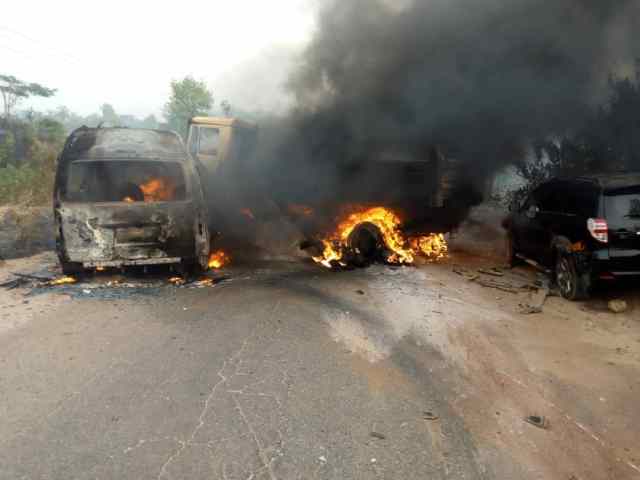 Five staff of Okomu Oil plc in Edo State were burnt to death while two sustained serious injuries in a road accident that occurred on Friday, February 14 evening.

The accident occurred along Iguobazuwa road in Ovia South-West Local Government Area of Edo State when the bus conveying the staff to the head office at Okomu from Extension 2 of the firm rammed into a lorry.

The two others who sustained serious injuries in the accident are said to be currently receiving treatment.

An eyewitness said help could not reach the staff as the bus burst into flames.

An official statement has not been issued by the company but a top official confirmed the death of their staff, describing the situation as said day for workers in the company.

“We are yet to confirm the number of our personnel involved but we have confirmed five. Two are in the hospital.

“They were coming to the head office from Extension 2. It is a sad day for us”, he said

An angry mob has lynched a suspected kidnapper, whose gang members abandoned after members of a security agency working in collaboration with the police arrested him.

DAILY POST gathered that the seven-man gang of kidnappers had while taking their victims along Obosi road, were accosted by the security agents.

A press release by the Anambra State Police Command, signed by its spokesperson, DSP Toochukwu Ikenga said six out of the seven kidnap suspects abandoned their victims and vehicles, and escaped.

Ikenga said the incident happened at about 9pm on Thursday, but a mob killed the arrested kidnap suspect.

“Preliminary information shows that security operatives intercepted a seven-man kidnap gang along Awada, and in an attempt to arrest the criminals, six out of the seven gang members escaped and abandoned both the victim’s vehicle and their operational vehicle.

“The seventh person, arrested was lynched by an angry mob and set ablaze before police operatives could arrive at the scene.”

Ikenga said following the incident, the Commissioner of Police, CP Echeng condemned the killing of the suspect, saying it amounted to taking laws into their hands.

The statement said, ”He condemned the act of mob action by some members of the public who resort to jungle justice whenever they arrest suspects in respect of criminal allegations without recourse to the Police for proper investigation.

“He also urged them to always exercise restraint by not taking the law into their hands. They should endeavour to take such suspects to the nearest Police Station whenever they are apprehended. This would afford the Police the opportunity to conduct appropriate investigations into the nefarious activities of the suspects, and bring them to justice in accordance with extant laws.

“Meanwhile, police operatives have initiated an operation aimed at arresting the fleeing gang members and the suspects who took laws into their hands by setting ablaze the arrested suspect.” The Federal Capital Territory Police Command has confirmed an attack by gunmen suspected to be bandits on Rafin-Daji community, Gurdi ward of Abaji Area Council of Abuja.

DAILY POST learnt that the bloodthirsty bandits attacked the area on Thursday evening, burnt down two tractors and abducted about 22 farmers.

Rafin-Daji shares boundaries with Zago community in Niger State. Both communities are connected through the river Gurara.

The gunmen, according to reports, stormed the area in a large number while some residents were working on their farms, shooting sporadically before whisking the victims away.

Confirming the development, the Deputy Police Public Relations Officer, ASP Oduniyi Omotayo told DAILY POST that a combined team of Police officers have been deployed to the area to rescue the abductees.

He said, “The incident happened in Rafin Daji, a boundary community between Niger and the FCT. The farmers were on their farmlands working when the gunmen kidnapped them.

“Upon receipt of this information, a combined team of Police officers from various Tactical and intelligence units of the Command, Destiny Hunters, Vigilantes, and Local hunters stormed the forest, combing it aggressively.

“This is for the rescue of the victims and to bring perpetrators to book. Monitoring and surveillance of the community also continues”.

BREAKING: Bandits Gun Down University Lecturer, Policemen, Others In Benue

Gunmen suspected to be bandits have killed at least five persons including two policemen, a university lecturer and two others in separate attacks in Benue State.

DAILY POST gathered that the attacks took place in Guma and Ukum Local Government Areas of the state.

Daily Trust reported that about two policemen were killed in Yelewata of Guma LGA, a border town between Benue and Nasarawa States when the armed men stormed the area.

Similarly, one Fred Akaayar, a lecturer in the Department of Mass Communication at the Federal University, Wukari in Taraba State and two others were gunned down at Jootar in Ukum LGA, a border community between Benue and Taraba States on Thursday night.

She said, “I received information about two policemen killed in an operation but I am yet to receive details please,” the PPRO stated in a reply to a text message sent by our correspondent”.