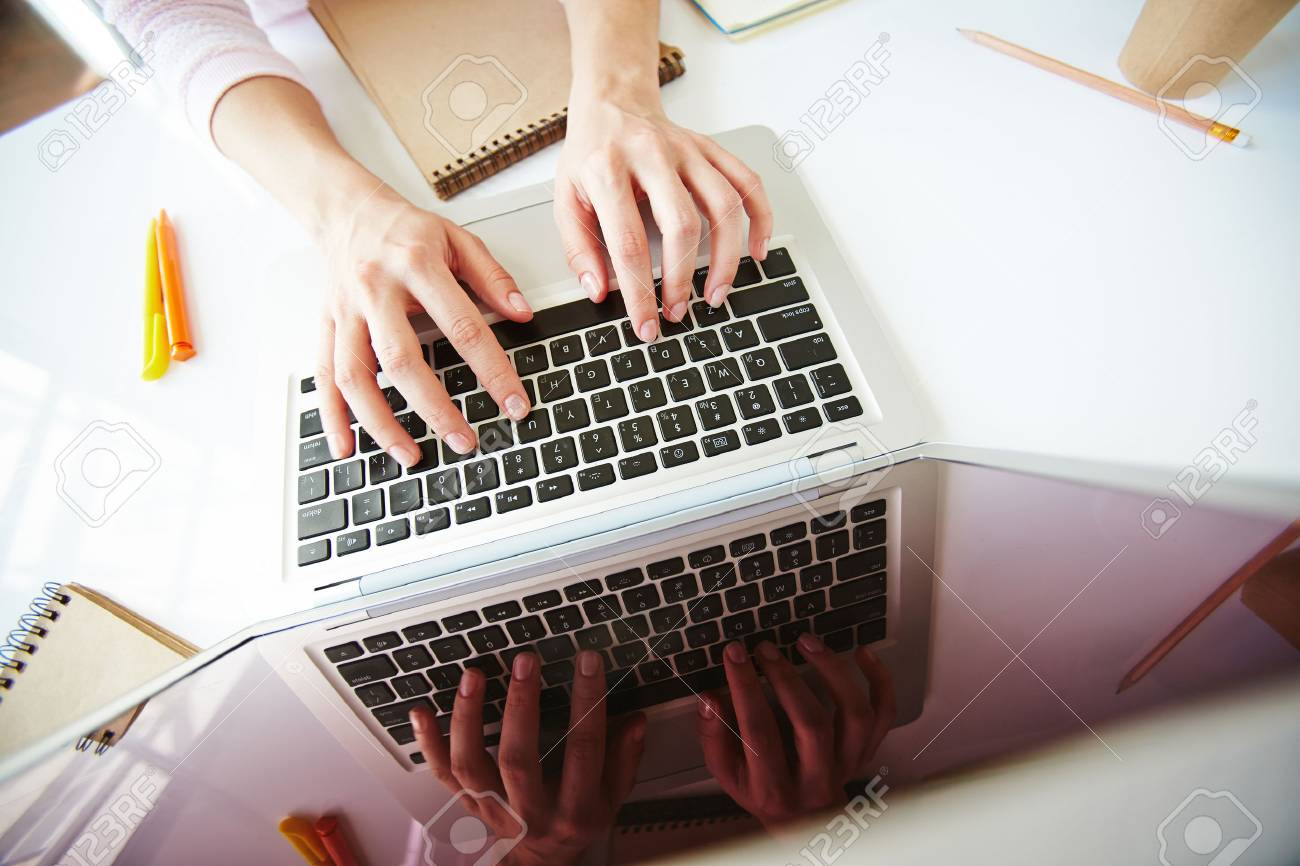 While the internet is a powerful tool for information, communication, education, innovation, economic growth etc, it has also made it easier for pedophiles to engage in online child pornography because they can now access and share pictures and videos of sexual activities involving children online.

Child pornography refers to pictures or videos of children in sexual activities. e.g. children that are half-naked, naked or having sex. It is also known as “child sexual abuse material”. It can be created through direct involvement of the child, sexual assault, computer or mobile phone.

The internet is now a common place where people share and trade images of children involved in sexual activities.

Research by experts revealed that within one year, 45 million images were reported to the National Center for Missing & Exploited Children.

Another research revealed that in every minute, over 2 million pornographic materials are exchanged online and children are the most vulnerable.

3. Compulsive use of the internet: The internet is loaded with a lot of pornographic materials which may lure users to online pornography when used excessively.

4. Indecent dressing among children: e.g. wearing of half nude dresses that expose the sensitive parts of the body.

5. Lack of Sex Education: When children have little or no knowledge about sex education they can ignorantly get involved in online child pornography or become victims.

1. Victim’s image will be seen by almost all internet users.

2. Victims are exposed to sexual activities at the early stage of their lives. This may later lead to sex addiction or multiple sex partners.

3. It affects the life of victims psychologically.

4. In some cases, victims will not be able to further their education because of the stigma.

1. Parents should give their children moral education and sex from the early stages of their lives.

2. Parents and their children should be educated about internet safety.

3. All pornographic materials should be kept away from children. e.g. pictures or videos with sexual activities.

4. Moral and sex education should be included in the curriculum of primary and secondary schools.

5. Religious, government and non governmental organizations should always organise awareness programs on the dangers and lasting solutions to online child pornography in the society. 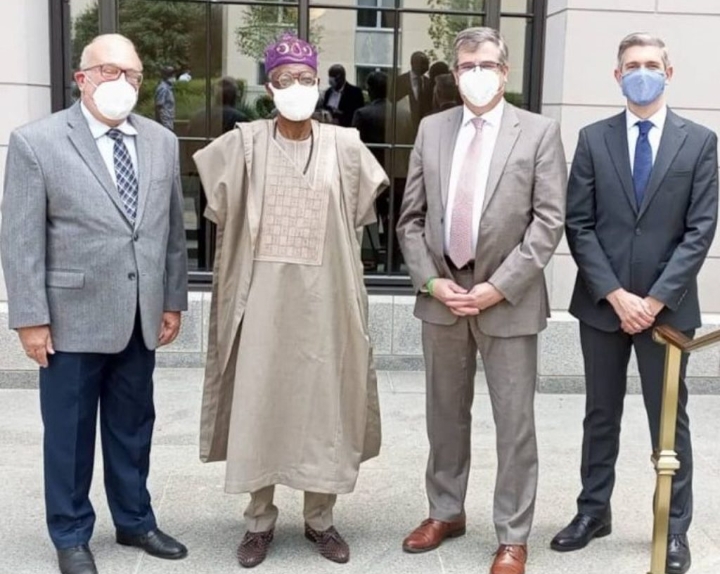 Matthew Page, the immediate past US intelligence expert on Nigeria has condemned the meeting between American officials and Information Minister, Lai Mohammed.

Page blew hot on Saturday after a U.S. Mission in Nigeria post on Twitter. A photo of senior cabinet members with the President Muhammadu Buhari appointee accompanied it.

In his reaction, Page, an associate fellow at Chatham House, expressed disgust that the officials met Mohammed.

He reminded America that the parley took place despite the All Progressives Congress (APC) chieftain’s declaration that the Federal Government of Nigeria “will not rest until social media is regulated”.

He wrote: “I just don’t understand why @USinNigeria, @AsstSecStateAF, @ECAatState thinks engaging with a lead architect of #TwitterBan & a lead propagandist for an increasingly authoritarian government is good foreign policy. Along with countless Nigerians, this tweet makes me cringe.”

Page clarified that he wasn’t against bilateral engagement on cultural heritage/property, saying Nigeria’s heritage sites/materials, are underresourced and underappreciated.

“But systemic corruption, waste and mismanagement by top FMIC (Federal Ministry of Information and Culture) officials and their predecessors (ad infinitum) is one major reason (not the only one, of course) why Nigeria’s culture heritage has not been properly safeguarded for future generations.”

The one-time deputy national intelligence officer for Africa, National Intelligence Council, stressed that NCMM (National Commission for Museums and Monuments) exist only for the sake of federal allocation.

He said the agency is not working for the marginalized workforce, the country’s historical and cultural sake, but for “the vampires of national resources”.

Page further quoted Mohammed as admitting that Nigeria has not yet done enough “to stop our own people and to convince them to protect their own cultural heritage”. 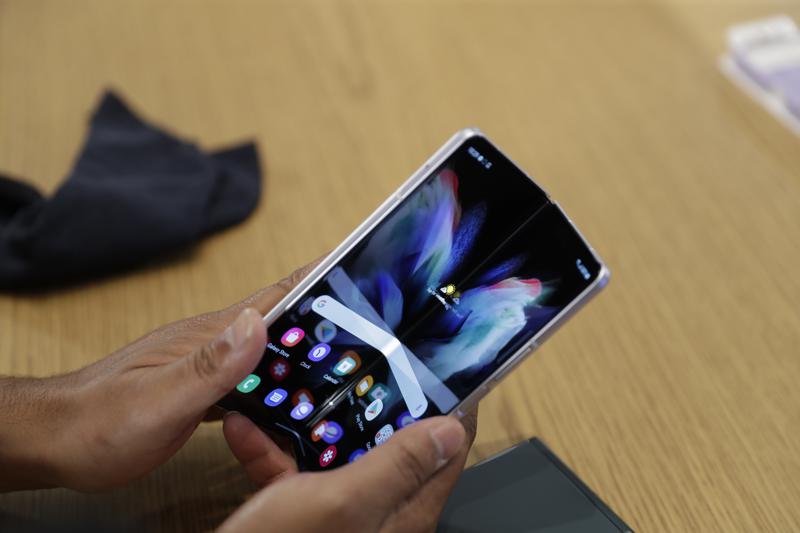 Samsung is hoping cheaper but more durable versions of its foldable phones will broaden the appeal of a high-concept design that’s so far fizzled with consumers.

The electronics giant on Wednesday launched its effort to turn things around with two new products designed to function as both a phone and, when unfolded outward on a hinge, a tablet.

The larger Galaxy Fold3 boasts a 7.6-inch display when unfolded and will sell for $1,800, a 10% drop from last year’s model. The other device, the Galaxy Flip3, looks more like a flip phone, but can still be opened from its clamshell position into a 6.7-inch display. It will sell for $1,000, more than 25% below the price for last year’s original model.

Besides the new phones, Samsung also unveiled its first smartwatches powered by software designed in tandem with Google as both companies try to catch up with Apple in that part of the wearable tech market.

Since releasing its first foldable phones in 2019, Samsung has been hyping the technology as a breakthrough that will spur more consumers to splurge on new phones instead of holding on to older devices until they wear out or upgrading to new models that have most of the same features.

But foldable phones have barely made a ripple in the smartphone market, with roughly 2 million of the devices shipped last year, according to the research firm International Data Corp. That’s a tiny fraction of the nearly 1.3 billion smartphones shipped worldwide last year, IDC said.

“What has really been holding back the mass consumption of these foldable devices is the high price,” IDC analyst Nabila Popal said. “Most people really don’t see the need for it. At least nothing that justifies forking out an additional thousand dollars.”

Popal believes Samsung’s lower prices for its latest foldable phones are still too far above what most consumers are willing to pay for phones. That’s one reason IDC projects only a modest uptick in foldable phone shipments this year, to an estimated 6 million to 7 million devices.

Besides high prices, sales have been held back by doubts about whether the foldable devices can withstand the wear and tear that traditional smartphones typically endure. Those worries have shadowed Samsung’s foldable line-up since it delayed the release of first models in 2019 to fix problems with bulging screens and flickering displays.

Samsung has equipped its newest foldable phones with more durable glass and water resistance to reduce the chances of the devices being damaged. It has made the foldable phones compatible with its popular S Pen stylus for the first time to woo customers accustomed to using the digital writing tool on Samsung’s traditional Note and Galaxy phones.

In another sign of foldable phones’ progress, nearly 50 of the top 100 mobile apps, are now available for its unique format, said Drew Blackard, the South Korean company’s vice president of product management.

Those improvements have emboldened Samsung to make the foldable phones its marquee products during the second half of the year, backed by a marketing campaign that will hail their advantages.

Blackard likened the third generation of Samsung’s foldable phones to the third generation of the company’s Note phones that came out in 2013 and changed the perceptions of a product line-up that was initially mocked for introducing smartphones with five-inch screens. Within the next year, Apple released the first model of its trendsetting iPhones with bigger screens that have now become a standard feature.

But Apple still hasn’t felt compelled to make an iPhone with a foldable screen yet. 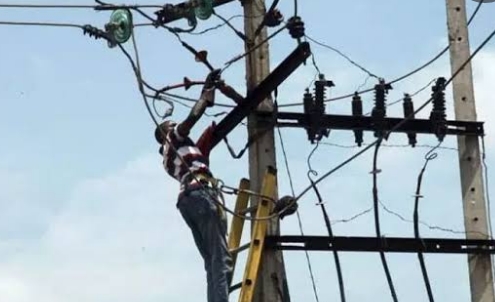 The company, in a statement signed Mr. Tayo Adekunle, Head, Corporate Affairs, which was made available to INFO DAILY in Benin, described vandalism as not only being economic crime but an act of sabotage against the good purpose and intents of the
company.

According to Mr. Tayo, the power sector has been the most hit in the most devastating manner, adding that the effect of vandalism cannot be overemphasized.

He lamented that, as a result of activities of vandals, residential customers, industries, small and medium scale businesses are being starved of power.

“The recent surge in cases of vandalism within our franchise area
calls for greater attention. More worrisome is the fact that these
miscreants are continuously innovating new ideas beyond human
comprehension to perpetrate their criminal acts.

“We see the recent
vandalism of 14 spans of electricity conductors in Ilu-titun, Southern
Ondo State, on a line currently being rehabilitated by the Niger Delta
Power Holding Company (NDPHC) as very disturbing. More disturbing is the fact that Okitipupa town was recently thrown into blackout as a
result of the vandalism of 20 spans of electricity conductors which
occurred between Ode-Aye and Okitipupa.

“As a company, we see these as
acts of economic sabotage against the good intents of BEDC,” he
remarked.

Mr. Tayo regretted that money
that could have been judiciously invested in network upgrade such as energisation of new transformers or construction of new lines to relief existing ones are being channelled towards replacing the
vandalised items.

“We are, however, not relenting in our quest to overcome this societal
issue through improved community relations drive of involving all
stakeholders at the grassroots aside ensuring that our facilities are
well securedin our bid to arrest this ugly trend,” the statement added.

While noting that vandalism of electricity distribution network and other forms of
electrical thefts are serious threats to power sector sustainability
and economic growth, Mr. Tayo said it has been major acts negatively affecting
service delivery to customers.

Mr. Tayo who gave success of the company in its fight against the menace of vandalism on its network, noted that some perpetrators of the evil act have been sentenced to jail in its franchise areas.

“Efforts by BEDC at curbing the menace of vandalism on its network had
received a boost with the sentencing of one David James to three years imprisonment by a Benin Magistrate Court 6 in Egor Local Government
area of Edo state recently.

“On 3rd July 2021, a 2.5MVA, 33/11KV Injection Substation at Igarra near Auchi, in Edo state was vandalized while RUM, upriser cables, incomer cables etc. were removed by the vandals.However, luck ran out of the vandals as they were arrested by the Police Division at Ogorimagogo in Kogi State and the stolen items were recovered. The arrested suspects were later transferred to SCID Lokoja, while efforts are being made by the Edo State Police Command to retrieve the arrested suspects and exhibits to Edo State where they will be charged to court at the end of Police investigation.

He therefore appealed to members of the public to be vigilant and security conscious on the activities of some “unruly elements in
the society whose aim is to make life unbearable for them through
their nefarious acts.”