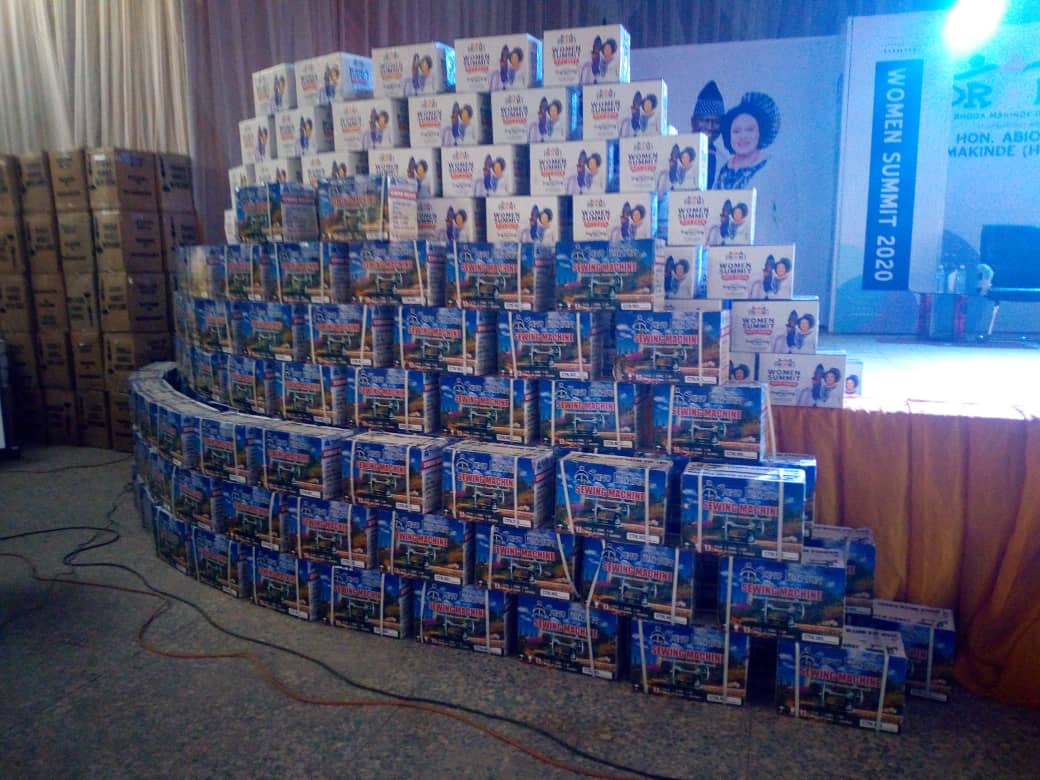 The founder of DROMI, Dr Rhoda Makinde, said the programme was founded to bring women of diverse economic backgrounds together to educate, inform, and inspire attendees to take charge of their lives and contribute meaningfully to family, community, and society at large.

She said DROMI was created after observing the link between micro businesses and women’s self- empowerment in the state. 45% of Nigerian rural women cite financial struggles as hurdle keeping them from running their businesses.

The founder added that DROMI has helped many women start their micro businesses and become financially empowered.

Makinde noted instrument that was given to the beneciaries are 114 sewing machines, 99 grounding machines, 41 dryer, 2 mixer and cash will also be given to some beneficiaries. 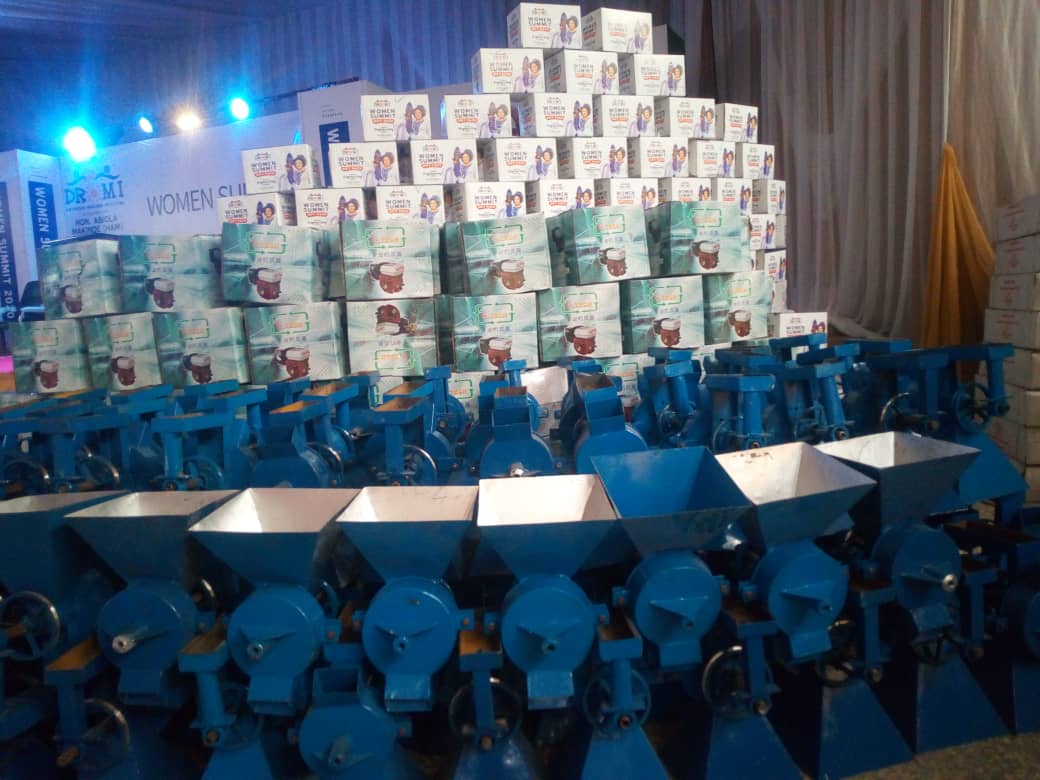 Some of the items donated

According to her, this summit will include information on how to use micro loans and save effectively from local banker.

She said it is imperative that every woman be equipped with the skills they need in order to take care of themselves and their families.

He enjoined the beneficiaries to make good use of the instrument given to them so that they can be good to themselves.

Hon. Makinde urged men to empower their wives so that they can also empower others.

Also speaking, the programme coordinator, Mrs Dupe Oluronbi said recognition of women’s contributions to economic and social development and of equality between men and women have increasing interest among policy-makers and development practitioners.

She noted that despite the improvement in gender awareness worldwide, data on women’s work and economic contribution have remained far.

Oluronbi added that evidence and experience have shown that in many African countries including Nigeria, women have been abused, marginalized.

She said discrimination and denied against women’s rights in most aspects of human endeavours. The situation is worse for the rural women who have low literacy level and, have become mere tools in the hands of their husbands.

She said women perform enormous tasks in their families and the society at large, adding that they have been oppressed and relegated to the background.

Oluronbi further said that women have not been fully involved in decision making to enable them contribute their own quota in national development. Inaccessibility to health, education and particularly in the planning process have hindered women development.

She posited that violence and abuse of women have also posed a great threat to the self esteem of women, saying the full potential and place is rightly in the sphere of human development.

She said that micro finance interventions will empower and stimulate women to achieve food security and economic empowerment.

Send Us Press Releases, Articles Via editor@infodailyng.com… For Your Event Coverage Call, Chat Us On 08067027581 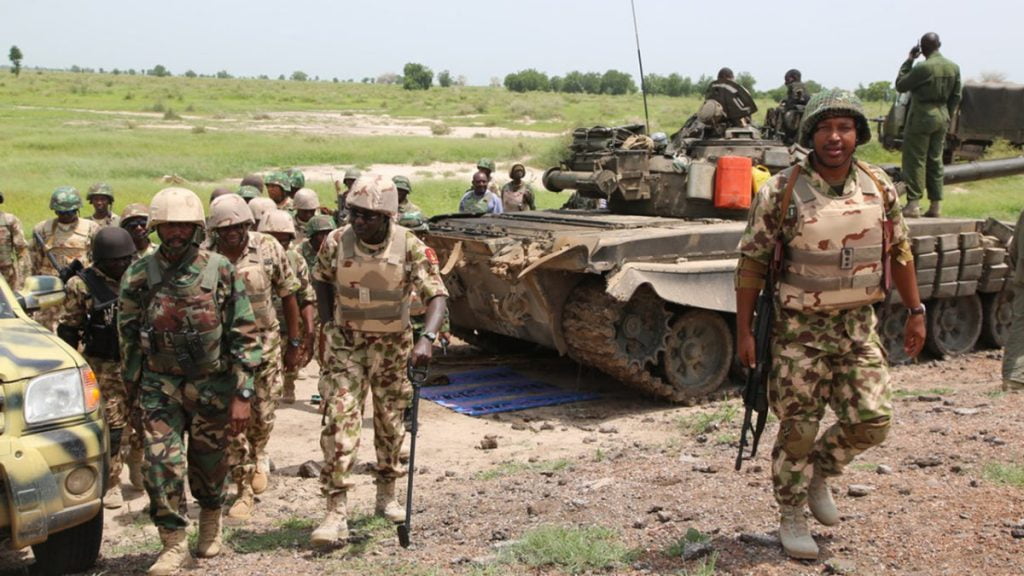 Operation Whirl Stroke (OPWS), the military operation in Benue, Nasarawa and Taraba states, rescued 21 persons from the hands of their abductors, who were identified as a local militia group.

The Public Relations Officer (PRO), OPWS, Flight Lieutenant Audu Katty, disclosed this in a statement in Makurdi, the operational headquarters of OPWS on Thursday.

Katty explained that 20 of the victims who were commuters were rescued by OPWS troops along Kente-Chinkai road in Wukari Local Government Area (LGA) of Taraba State on Tuesday.

He further explained that a local with a machete wound was also rescued in the course of pursuing the militia that had earlier abducted the commuters.

The OPWS spokesman said the local, who was badly wounded, was taken to the primary healthcare centre in Kente for treatment.

According to Katty: “On 6th December 2022, the gallant troops of Op Whirl Stroke while responding to distress calls on the activities of a local militia along Kente-Chinkai Road in Wukari LGA of Taraba State mobilised and moved to the scene.

“The local militia in their numbers, dressed in full military attires on sighting advancing troops abandoned their hostages and fled into the bush.

According to him, the troops rescued all the hostages, the 20 commuters, from their abductors.

“Troops further exploited deep into the bush and rescued an unidentified local with machete injury on his head. The rescued victim has since been taken to Kente Primary Health Care for treatment.”

He stated that the troops thereafter launched a manhunt for the militia and trailed them to their hideout.

Said he: “Contact was made with them. Troops responded and overpowered them with superior firepower making the militia flee in disarray with possible gunshot wounds.”

Katty also stressed that Operation Whirl Stroke will continue “to safeguard the lives of innocent citizens across the area of its responsibility” while he solicited the “cooperation of the locals to continue giving timely information on the activities of criminals.”

The Nigeria Security and Civil Defence Corps said its operatives recovered 43 ammunition during a gun battle with a kidnap syndicate operating at Okuru-Ama, waterside, near Port Harcourt.

Ogar said the command’s Anti-vandal squad engaged the suspected kidnappers for about 25 minutes, saying the hoodlums fled on noticing the superior firing power of the operatives.

“Following a sustained Intelligence on the activities of a kidnap syndicate hideout discovered at an uncompleted building located in Okuru-Ama waterside our men swung into action and engaged the suspects in a duel gun battle for 25 minutes.

“They however escaped through the waterways when they discovered our men almost overpowered them.

“However, we were able to recover the following items at the scene of the occurrence: six AK-47 rifles magazines, three Tavor gun magazines, 43 Tavor K2 Ammunitions, 1 Breech block, charms with animal horns.

“Also, a wristwatch and an empty bag. Our men will continue to patrol the area as we enjoined the public not to relent in giving the command credible information that would lead to their arrests.

“You can rest assured that the informant’s identity would be jealousy protected”.

In another development the following, the state NSCDC commandant said 24 suspects for their alleged involvement in oil theft.

Ogar said the suspects attempted to vandalize pipelines belonging to the Nigerian Agip Oil Company, as well as for conspiracy, advance fee fraud, illegal possession of ammunition, obtaining by false pretence and other criminal offences.

He added, “The NSCDC Rivers State Command operatives in joint operations with the Military, Nigerian Police and the DSS attached to Abilli Integrated Service Limited arrested about 19 suspects while attempting to vandalize the Nigerian Agip Oil Company Pipelines.

“While on routine patrol along the waterways the Command Anti-vandal Marine Team Impounded a wooden boat laden with unquantified litres of AGO, the suspects actually abandoned it and dived into the water while being chased by our men. Notably.

“Four other suspects were arrested for Sales of Pre-registered SIM Cards by our operatives in conjunction with the Nigerian Communication Commission, one Mr Akpan Daniel was also arrested for advanced free fraud and obtaining by false pretence to the tune of N3m which he claimed to have invested in a forex trading on behalf of the Complainant.”

Ogar assured that the corps will continue to fight against crimes and criminalities in the State, saying all the suspects would definitely have their time in court.

He further said the command has intensified the fight against oil theft and illegal oil bunkering activities to save the nation’s economy from saboteurs.

He, therefore, solicited the support and cooperation of the public through useful information to activate actionable intelligence that would help forestall criminal acts, “So that the State can be a safe haven for all dwellers.” 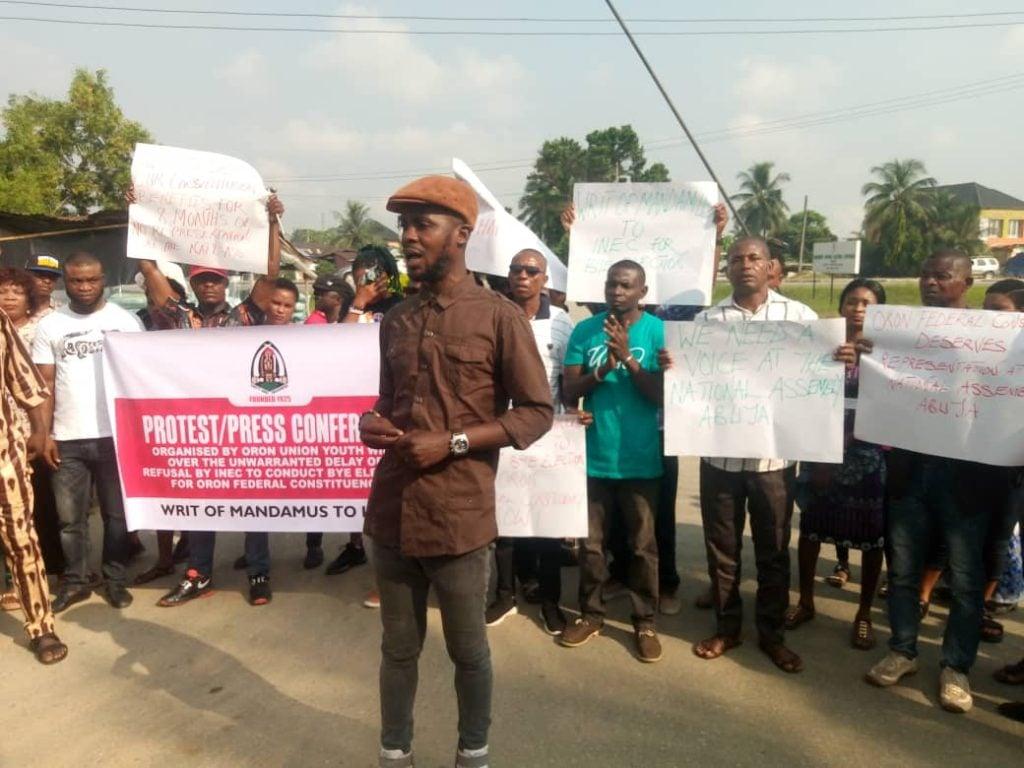 Youths of Oron Union in Oron Local Government Area of Akwa Ibom State had stormed the premises of the Independent National Electoral Commission, INEC, along Udom Udoma Avenue Uyo in protest of what they described as ‘delay or tactical refusal’ by the commission to conduct a bye-election to fill the vacant office of the federal constituency.

The position was left vacant after the demise of Nse Ekpenyong
a former House of Representatives Member for the Oron Federal Constituency who died on April 23, eight months ago and his seat declared vacant on June 30 by the Speaker during his internment.

The youths of the area in a protest on Wednesday lamented that the absence of representation had deprived them of many benefits and rights from the National Assembly accusing the electoral umpire of nonchalance in conducting a bye-election in the area.

Displaying placards with various inscriptions such as “INEC sabotaging our constitutional benefits for 8 months of no representation, ‘Oron Federal Constituency deserves a Representative from National Assembly in Abuja, ‘We need a voice at the National Assembly,” among others, the youths urged the INEC National Chairman, Prof Yakubu Mahmood to ensure that the bye-election is conducted immediately in the federal Constituency.

The youths described the federal constituency as the largest in Nigeria with the highest oil producing communities in the Niger Delta.

Speaking on behalf of the protesters, the International president of the group, Mr John Bassey flanked by the secretary, Maxi Mkpo recalled that INEC sometime in January conducted bye-elections for six constituencies in four states of the federation and wondered why Akwa Ibom would be different.

The statement read in parts, “Today, we are gathered here to send a very strong signal to the Chairman of National Electoral Commission INEC Prof, Mahmood Yakubu over this perceived cruel disenfranchisement and broad daylight robbery of our constitutionally and democratically given right to representation at the green Chambers of the National Assembly, Abuja.

“INEC has technically avoided any process that could be initiated for the conduct of a bye-election in our federal constituency. As a people, we are deliberately being denied our right to representation as obtained in the constitution of the federal republic of Nigeria.

”It is about eight (8) good months since the unfortunate departure of our Late MP in April 23rd, this year and the subsequent declaration of the seat vacant by the speaker followed by his internment on 30th June 2022. Hence, we are bitterly worried over what could be the justification for INEC not to facilitate the process of conducting a bye-election to fill the vacant seat.

“Recall, an indigene of Mbo LGA, Mr. Emmanuel Inyang, on October 12th 2022 embarked on a one-man protest to the Uyo office of the Independent National Electoral Commission (INEC) over what he described as ‘unnecessary delay’ by the Commission to fill in replacement, for vacant seats in the National Assembly. This press conference is to re-emphasize and state our points of anger categorically and unequivocally to INEC about the looming dangers of its seeming refusal to conduct the bye-election and the many disadvantages of such an undemocratic delay to the Oro people.

“Our point is very clear and straightforward, we are calling on INEC to fast-track the processes of conducting a bye-election for this mega and oil-rich constituency to avert any future breakdown of law and order within the already volatile elections season and Niger Delta region.”

He also called on members of the parliament representing other federal constituencies within the state to join hands in solidarity in condemning such acts during sessions.

He added that further delay by the commission to accede to their request before the end of December 2022 will leave them with no option but to occupy the state headquarters of INEC from the first of January 2023 until the needful is done.

However, the Head of Operations of INEC in Akwa Ibom, Vincent Ogene addressing the youths assured them that the issue will be addressed.

Ogene commended the youths for their orderly and peaceful conduct nothing that the commission at the national level will give a directive on what is to be done.