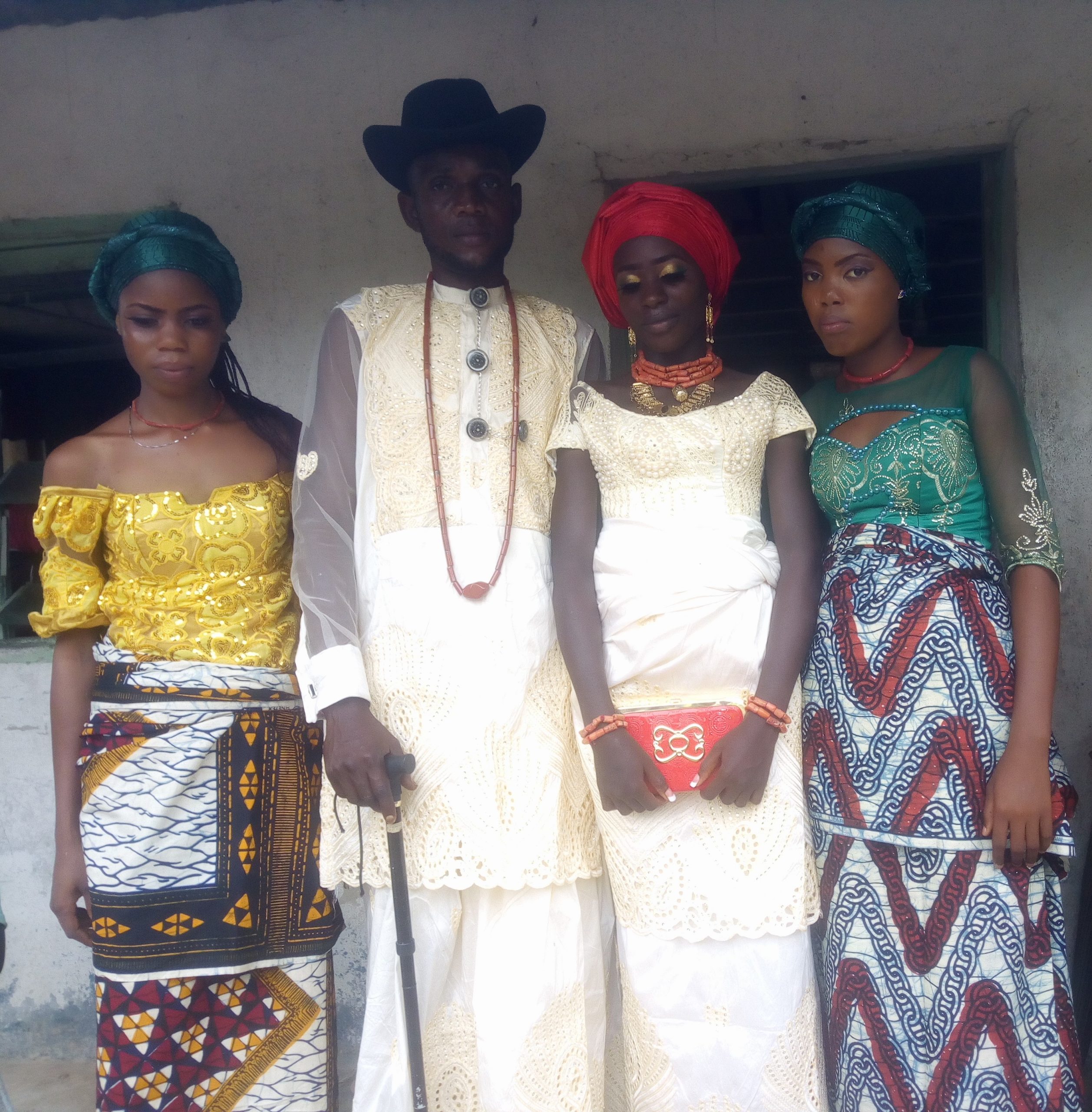 Owei and his new wife in the middle

Freetown Pereama, the Grandmaster of Ijaw music in one of his albums sings, paraphrase: ‘izon mo oniye mo, oniye mo, oniye mo, kemetubo pagha yẹ ere nanagha egberi gbolo de yẹ; keme tubo pagha tubọ zigha ye egberi gbolo dé ye…’ Meaning: Ijaw and their ways of doing things/thinking, a man born to this world, he is not married as when due (matured), Ijaw will be called names, talk about him and owe all sort of erroneous beliefs about him; a man born into this world, he does not bear a child, Ijaw will call him all sort of names…

This lyrics may have perhaps prompted Owei Akpfagha to have approached Birinimigha of the Ekperu family, Taribo community of Ebijaw ward six, Odigbo Local Government Area of Ondo State, to ask her hands in a relationship and she said yes and so, the relationship matured to marriage.

Not want to go by the way being practised by some persons particularly in this part of the country, the Akpofagha family push for date for the traditional marriage wherein the Bride-price is paid. It is worth noting that Owei has royal blood flowing in his vein hence the family partucularly High Chief Ebi wouldn’t probably want the family name soiled through ‘credit’ marriage or say ‘marry, bear children and pay later’, as it is common with some people. Consequently, November 9, 2019, was fixed for the traditional marriage between Owei Akpofagha and Birinimigha Ekperu.

As early 11:00am of the D-Day, the family had converged on Akpofagha’s compound, Taribor community, to get the Ikor (Bride-Price) as it being called, paid. As usual, and as the tradition of this set of Ijaw speaking people requires, two men were chosen as messengers while elders in the family sit back to send them to the Bride family whom at the other end of the family had converged on the compound of the father to the Ayoro (Bride) to receive the Ikor. At this point, bargaining through these two messengers were done, and it was only when, in the course of the message, a question or request was beyond the messengers’ capacity to handle that the elders assigned other olders ones to go to the other family to bargain further. After the exchange of messages between the two families and all the requires bills paid, the Ayoro (Bride) was called by her family for questioning.

She was accompanied by some women from Owei’s family while her faced covered. At this juncture, some of the questions her family might have probably ask her are: if she was ready for the marriage; was she coerced/forced to marry him; if she was ready to stay in the husband’s house no matter what may.

She was thereafter brought back to the groom’s family. It was after this stage that the Tumo-tumo came in. Tumo-tumo is the stage the whole family of the Groom and well-wishers formerly accompanied the Bride and Groom to the Bride’s family whom in turn welcomed them. Owei and Birinimigha were accompanied to his wife home with drumming, singing and dancing while two young ladies (one for Owei and one for his wife) cover them with umbrella. Literally, the umbrellas too were dancing to the drums and the melodious Ijaw songs. The dancing and singing continued until they entered the room wherein the waiting bride family members were to welcome them.

Immediately they entered the waiting room came the next which the most glamouring stage. When the new couple got to the seating of the family, they (couple) sat on the mat apparently prepared for them in the middle of the people. Thereafter the drumming and dancing stopped for another level of dance. At this juncture, two young ladies who tied Igburu (rapper) came out to dance Awigiri/Owigiri. As the tradition requires at this stage, the ladies danced to three different occasions before the Bride family formerly welcomed them and there after moved to the next stage. The first dance to songs is ‘tugha’ (bonus or not counted) before they danced to other three songs to make it compete.

After this stage, dried gin was brought by one of the messengers for the Bride father which he used to pray and gave to the couple to drink. Here the Groom served his father in-law with a glass of gin which he prayed on and poured on the floor. He served him another which he used to pray for the husband and wife and then handed the glass of the dried gin to the Groom who received it on his knees and drank and gave to his new wife. Worth noting, he stands to his feet before handing down the glass of drink to his new wife whom on her knees received it.

Next after the series of prayers was the first assignment for the new groom to the In-laws. His father in-law gave him the bottle of dried gin to serve the family and he started from the person at the immediate left of his father in-law and the serving went clockwise untill it got to his father in-law who is the last person to be served. He served both young and old and those from his family who were sitted while on his knees. He crawled from one person to another to serve. One important thing to note, the bottle of drink he started with must not get exhausted during the process of servicing until it (the wurutu/bottom of the drink) gets to his father in-law. If it gets exhausted in the course of serving, he has to purchase another dried gin and start, but Owei case was not so. He excelled in this by serving everybody successful to make sure the bottom drink got to his father in-law. He was hailed for successfully carrying out his first assignment. The in-law thereafter prayed for him with the drink before the event moved to the next stage.

The next stage is one of the crucial stage for the couple partucularly the Bride; it is a stage for advice and counseling from the family. The first thing the Bride father did was to remind his daughter that there are forbidden things binding a woman as far as the Ijaw tradition is concerned, saying such things are known to all and sundry, he stopped there but Double Chief Saidu Ogoba urged him to mention/list the ‘tonyes’ (forbidden things) for people particularly the younger generation to learn that after all, learning is a continuous exercise. He made mention of few. Interested in knowing such? Listen to King Robert Ebizimor (now late) Amatonye song. All what he mentioned can be found King Ebizimor’s ‘Amamaton-tonye.’ The family there after poured out pieces of advice one after the other, both male and female, all bothering on how to stay pieceful with her husband, family members and all that will make her a good wife in her husband home and before her husband family.

She was thereafter handed to the Groom family and in dancing and singing they danced back to their home and the party continued till dawn.

Happy married life to a brother, Owei Akpofagha and his new wife.