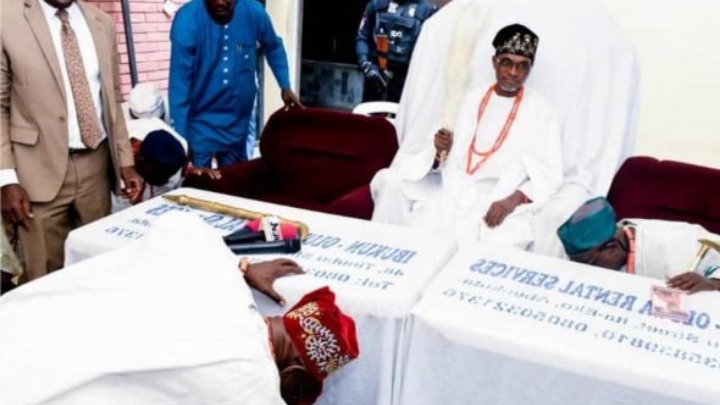 In his usual character, Obasanjo bowed before the newly approved monarch as a show of honour to the crown, symbolising the superiority of Yoruba Obas over their subjects, no matter how highly placed.

The new Olowu, who is just beginning the necessary six months of traditional rites, met the Balogun of Owu, at his old Ita-Iyalode residence in Abeokuta, Ogun State capital.

While presenting the monarch to other Owu chiefs and indigenes, Obasanjo assured him of his support and that of the sons and daughters of the kingdom.

The former President said this was the fastest time a new king would be filling a vacant Olowu stool after the passing of an Oba, saying “We have preserved our culture and tradition and we must not allow our culture go into extinction.” 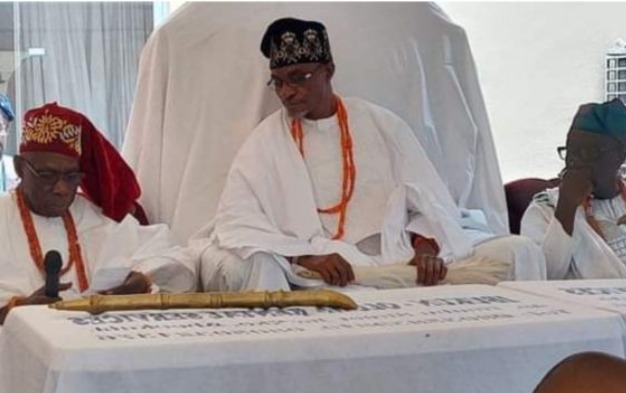 He expressed satisfaction that the process of selecting the new Olowu by the kingmakers got the approval of the Ogun State Government last Wednesday, even though some people were not happy with the kingmakers.

“We did what we are supposed to do and some people were not happy with us, but we thank God that the state government approved his (Matemilola’s) appointment,” he said.

DAILY POST reports that the kingmakers, led by Obasanjo, had screened seven candidates eyeing the stool vacated in December 2021 by the late Oba Adegboyega Dosunmu.

“I want to assure you of my unalloyed support and the support of the entire sons and daughters of Owu kingdom in your journey as the new Olowu,” Obasanjo told the new Oba.

Advertisement
Related Topics:#ObasanjoOlowu
Up Next 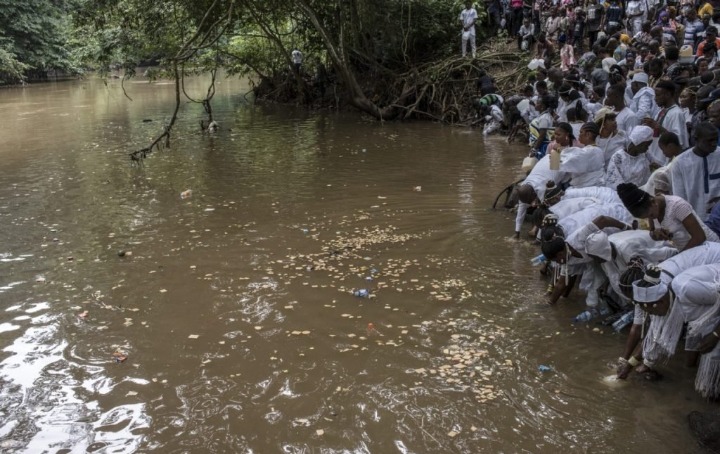 Devotees of the Osun deity were on Friday spotted drinking from the Osun River despite warnings from the Osun State Government that the water had been contaminated by activities of artisan miners.

As the Osun-Osogbo festival comes to a climax on Friday, August 12, thousands of Osun devotees and visitors had converged on the Osun grove.

DAILY POST reports that many of them were seen fetching water from the river in different containers and also drinking the water on their way out of the grove.

Devotees and visitors, who had trooped out to the riverside in their white attires and beads, were seen singing and dancing to traditional songs.

The Osun State Commissioner for Health, Rafiu Isamotu, speaking earlier with journalists, said public health officials would be at the grove during the festival to further sensitise people on the dangers of drinking the water. 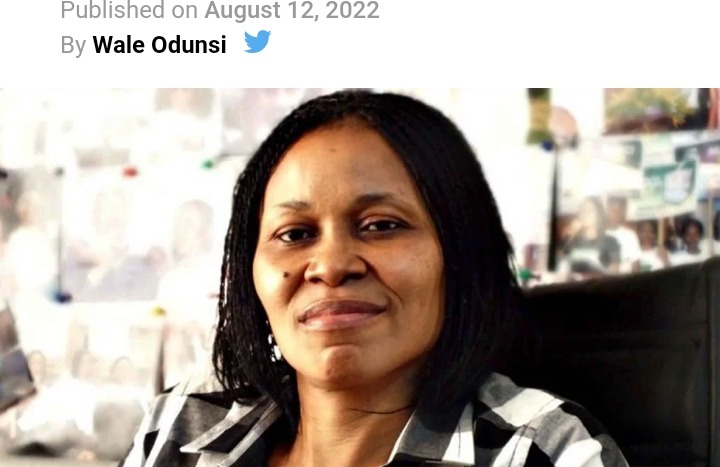 Renowned rights activist, Joe Okei-Odumakin has urged Nigerian leaders to commence the process of restructuring backed by a constitutional framework.

The President of Women Arise revealed that restructuring was her husband’s last word before he died.

Okei-Odumakin spoke at the 1st Anniversary of Mohammed Fawehinmi Lecture and Book Presentation held in Lagos on Thursday.

“Restructuring, the last word on my husband’s breath, is the road to Nigeria’s revival. Without restructuring, we cannot remove the federal failures afflicting us”, NAN quoted her saying.

She noted that the current system is sustained by election rigging, census manipulations and corruption “which brings proceeds in sinful rewards”.

Okei-Odumakin, charged Nigerians to get their Permanent Voters’ Cards, vote and defend their votes on election days.

The activist further advocated the increase of women representation at various federal and state positions.

“Why are women good to lead only until elections and benched afterwards when the spoils are shared?”, Okei-Odumakin quipped.

In order to overcome security challenges in the country, the Nigerian Army has trained 106 cadet officers of the 69 Regular Course of the Nigerian Defence Academy (NDA) on mechanised operations in Bauchi State.

Speaking on Thursday evening during the closing ceremony of the training exercise at Victor Kure Armoured Range, Maj.Gen. Ibrahim Yusuf, said that the Commandant, Nigerian Defence Academy (NDA) was to tackle the insecurity challenges facing the country.

According to him, the week-long training which was tagged ‘Exercise Battle Crime’, was to expose them to various mechanised operations in tackling security challenges.

“This exercise here today is the final phase of mechanised operations which is phase four of the Cadets exercise.

“The objective of the exercise is to expose the Cadets to mechanised operations in order to prepare them for dealing with the current security threats,” he said.

DAILY POST gathered that the cadets would be graduating from the academy in October, 2022, adding that there were seven female officers amongst them.

The commandant also stated that the exercise was a joint operation and a collaboration between the Armoured Corps, the Corps of Artillery as well as the Special Operations Command of the Nigerian Air Force.

He also revealed that before the training, cadets were at the Nigerian Army School of Military Engineering, Makurdi, where they participated in an assault river crossing operations across River Benue and proceeded to the Citizenship and Leadership Training Centre, Jos, Plateau State, where they went through the adventure phase of their training.

Yusuf, however, commended the Chief of Army Staff (COAS), Lt.-Gen. Faruk Yahaya, for his resolve in making the training possible.

“All these couldn’t have been possible without the overwhelming support from the Chief of Army Staff. All the tanks, the Artillery guns that took part in this operation were courtesy of the CAOS.

“We appreciate Army Headquarters for this outstanding support and I also want to appreciate the Chief of Air Staff that has authorized the Air Force to provide close air support during this phase of the operation,” Yusuf said.

Also speaking, the Commander, Armoured Corps, Maj.-Gen. Suleiman Idris, said that this is the first time that the NDA cadets would be coming to Bauchi state to have this kind of training exercise.

Nigerians Blame Buhari For Everything, Including Bad Performance In Bed – Femi Adesina