Based on need for gender-responsiveness interventions to address forced migration and trafficking, United Nations (UN) Women in collaboration with the governments of Nigeria and Italy is implementing a pilot intervention in Edo and Lagos states, with a potential of upscaling to other parts of the country.

Comfort Lamptey, UN Women coordinator disclosed this in Benin City at the formal launching of the Project on ‘Preventing Forced Migration and Trafficking of Women & Girls in Nigeria.’

She said the project launched was to both recognise and build on the efforts of the Nigerian government in addressing trafficking and irregular migration, promising to build on mechanisms and structures set up at state level, including the Edo State Taskforce Against Human Trafficking and NGO Taskforce on Trafficking.

“The project being launched today both recognizes and builds on the efforts of the Nigerian government to address trafficking and irregular migration. Here in Edo State, it will build on mechanisms and structures set up at the State level, including the Edo State Taskforce Against Human Trafficking and the NGO Taskforce on Trafficking.

“Nigeria presents itself simultaneously as country of origin, transit and destination for all streams of migration and trafficking. Beyond irregular migration, Nigeria also experiences significant trafficking”, she added.

According to the Coordinator, UN Women is working to support government of Nigeria’s developmental and humanitarian priorities and frameworks, adding that these are anchored in the Sustainable Development Goals (SDGs).

She further said the Goals hold that states collective interest and the most vulnerable people and populations are not left behind by economic, social and environmental progress.

“Out of the 17 SDGs, trafficking in persons is specifically mentioned in three targets under three goals: Goal 5 (Gender Equality), 8 (Decent Work and Economic Growth) and 16 (Peace Justice and Strong Institutions).The project we are launching today is therefore situated within broader efforts to support accelerated progress and realization of the SDGs”, she added. 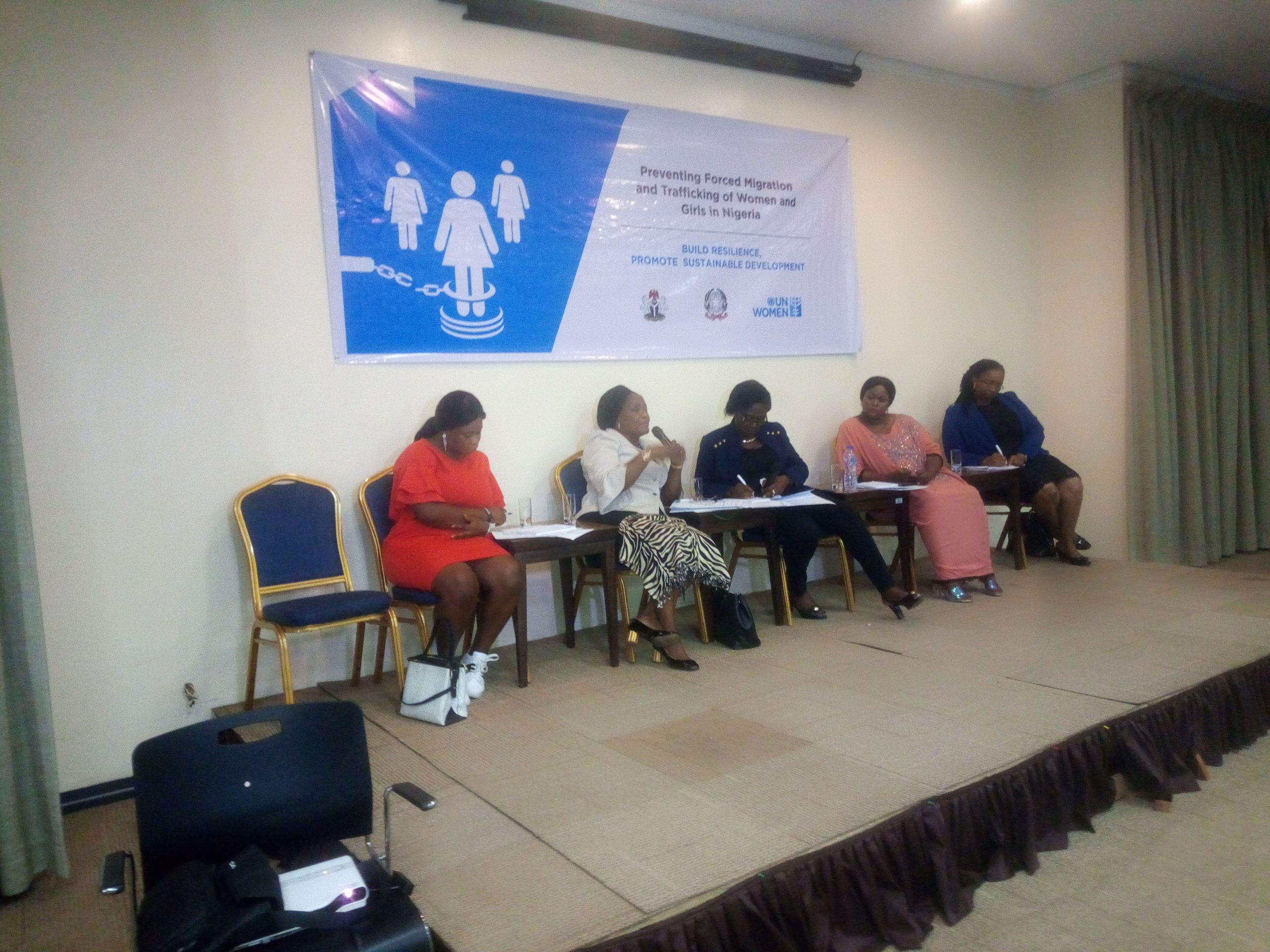 Panel of discussants at the launching

Lamptey lamented that women and children constitute majority of those trafficked to Europe as well as being irregular migrants to other African destinations and the Middle East, adding that such irregular migration is being facilitated through agents, family acquaintances, etc.

She noted, “Women and children constitute the majority of those trafficked to Europe, as well as being irregular migrants to other African destinations and the Middle East. While there are dynamic shifts over time, the main sites of forced documented and undocumented migration and trafficking include Edo State, the Delta and some Northern states.

“As most of you know, the trafficking and irregular migration of women and girls in Nigeria is facilitated either formally through agents, or informally through family and acquaintances. Criminal gangs and networks operating are also increasingly involved in trafficking.

“Women and girls are primarily working in or trafficked into sectors like domestic work, the sex sector and farms, which further exposes them to a range of other violations, including various forms of gender-based violence.”

Lamptey further lamented that in spite of efforts being made by government and individual bodies, potential for women’s organizations to support efforts aimed at preventing and addressing the effects of forced migration and trafficking remain under-utilized.

The United Arab Emirates, UAE, has again announced indefinite suspension of flights from Nigeria to Dubai This is coming barely 48 hours after the UAE announced that it has finally...