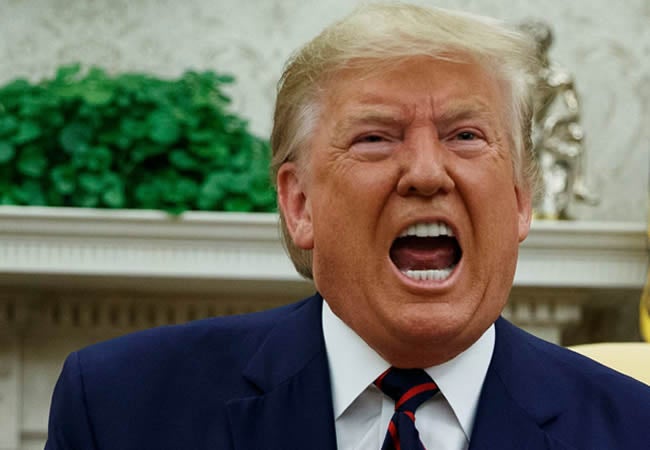 Donald Trump has warned that the U.S. will ‘strike back’ harder at Iran if it retaliates against over the killing of military leader Qasem Soleimani.

‘These Media Posts will serve as notification to the United States Congress that should Iran strike any U.S. person or target, the United States will quickly & fully strike back, & perhaps in a disproportionate manner,’ Trump tweeted on Sunday afternoon.

‘Such legal notice is not required, but is given nevertheless!’ he continued.

The president remained largely silent on Twitter for most of the day as he golfed during his last winter vacation day in West Palm Beach.

He broke his silence after returning to Mar-a-Lago from his golf resort and took a hit at lawmakers and politicians who have criticized him for not notifying or consulting Congress before directing the attack.

Trump ordered an airstrike on an Iraqi airport in Baghdad, which took out Soleimani – who was classified by the Obama administration as a terrorist.

The attack came just days after protesters who support Iran-backed Iraqi Shia militia raided on New Year’s Eve the U.S. embassy in Iraq, which has never been breached before.

Several U.S. politicians and pundits have questioned whether the attack was warranted and have said they haven’t seen enough intelligence to warrant the action. Trump said he ordered the killing because Soleimani had ordered attacks on Americans in the Middle East.

Iran has since placed an $80million bounty on Trump’s head and threatened to attack the White House in response to the president’s warning that any strike on American interests in the region will bring massive retaliation.

An organizer for a funeral procession for General Qassem Soleimani called on all Iranians to donate $1 each ‘in order to gather an $80million bounty on President Trump’s head’.

The organizer made the remarks during the procession in Mashad.

Iran has also announced it they will no longer abide by any of the limits of its 2015 nuclear deal.

A statement issued by Iranian President Hassan Rouhani’s administration said the country will not observe limitations on its enrichment, the amount of stockpiled enriched uranium as well as research and development in its nuclear activities.

It did not elaborate on what levels it would immediately reach in its program.

The International Atomic Energy Agency, the United Nations watchdog observing Iran’s program, could not be immediately reached for comment.

Earlier on Sunday, the Iraqi parliament voted for US troops to be expelled from the country. The vote will ‘obligate the government to work towards ending the presence of all foreign troops on Iraqi soil,’ the country’s media office stated.

As tensions escalate after Soleimani’s death, Iranian MP Abolfazl Abutorabi threatened to launch an attack on American soil in retaliation.

‘We can attack the White House itself, we can respond to them on the American soil. We have the power, and God willing we will respond in an appropriate time,’ Abutorabi said, according to the Iranian Labour News Agency.

Abutorabi went on to say that ‘this is a declaration of war, which means if you hesitate you lose’.

‘When someone declares war do you want to respond to the bullets with flowers? They will shoot you in the head,’ he added.

Abutorabi’s threat was made during an open session of parliament in Tehran just days after Iranian military Soleimani was killed in a drone strike on Friday at Baghdad airport. Soleimani was the architect of Tehran’s overseas clandestine and military operations as head of the Revolutionary Guards’ Quds Force.

After Sunday’s funeral marches in Iraq, where thousands of people gathered, Soleimani’s body was flown to the city of Ahvaz in southwest Iran. Video from the scene showed a casket wrapped in an Iranian flag being unloaded from a plane as a military band played and the crowd angrily chanted ‘Death to America’.

On Saturday, Revolutionary Guards commander Major General Hossein Salami promised ‘strategic revenge’ which will definitely put an end to the US presence in the region’.

However, Trump, who Iranian leaders branded as a ‘terrorist in a suit’, threatened to hit 52 critical targets in Iran in retaliation if Tehran strikes any American interests in the region. He upped the stakes after Iran said it had identified 35 targets for potential strikes and raised its red ‘flags of revenge’ over a key mosque.

An organizer for a funeral procession for Soleimani reportedly called on all Iranians to donate $1 each ‘in order to gather an $80million bounty on President Trump’s head.’

But Trump replies saying: ‘Let this serve as a WARNING that if Iran strikes any Americans, or American assets, we have targeted 52 Iranian sites (representing the 52 American hostages taken by Iran many years ago), some at a very high level & important to Iran & the Iranian culture, and those targets, and Iran itself, WILL BE HIT VERY FAST AND VERY HARD. The USA wants no more threats!’ Trump tweeted on Saturday from Mar-a-Lago, after spending the day at his nearby golf course.

‘Iran is talking very boldly about targeting certain USA assets as revenge for our ridding the world of their terrorist leader who had just killed an American, & badly wounded many others, not to mention all of the people he had killed over his lifetime, including recently hundreds of Iranian protesters,’ Trump said.

‘He was already attacking our Embassy, and preparing for additional hits in other locations. Iran has been nothing but problems for many years,’ he continued.

Trump’s threat referenced the Iran hostage crisis of 1979-1981, in which 52 US diplomats and citizens were held hostage by student revolutionaries in Iran.

YOU MAY ALSO LIKE:Kenyan Preacher Stabs Wife And Kills Self At Pulpit

His threat to target sites important to ‘Iranian culture’ drew many accusations from critics that he was threatening to commit ‘war crimes’. A White House spokesman did not immediately respond to an enquiry about the list of US targets from DailyMail.com.

‘They attacked us, & we hit back,’ Trump said of the drone strike on Soleimani, which followed assaults on the US embassy in Baghdad by pro-Iranian militiamen.

‘If they attack again, which I would strongly advise them not to do, we will hit them harder than they have ever been hit before!’ he said.