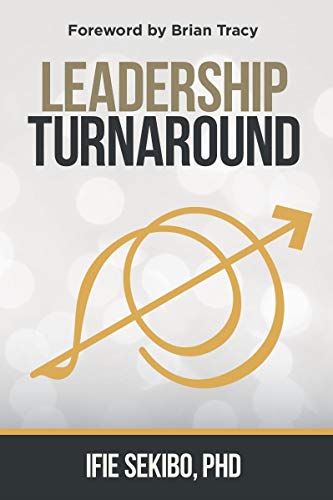 The man Ifie Sekibo is an astute Nigerian banker and entrepreneur adept at returning moribund companies to the path of sustained profitability. He is the pioneer and current CEO and Managing Director of Heritage Bank, Nigeria’s most innovative bank. A post he held since 2012.

He wrote his book (Leadership Turnaround” out of his quest to tell his story from climbing the ladder of success to attain leadership positions. He did not hold back on the failings and challenges he encountered on his way up. From his successful revival of Societe Generale Bank of Nigeria (SGBN), a massive success by any metric, to the creation of Heritage Bank.

Leadership Turnaround is a condensed commentary from a leader who has recorded remarkable successes, failed in some instances along the way, picked himself up and made it a duty to get better. It is the story of a leader, reputed for turning around failed enterprises, as well as having a knack for spotting and nurturing SME’s.

The book downplays what has become the regular leadership clichés, and opted for the language of experience, presented in a dialogic and conversational tone. Perhaps, knowing that the many leadership books hanging on bookshelves are heavily laden with theories, the author adopted a practical approach, which sets it apart from the others.

Written on the premise that “The essence of true leadership is that you impact your local community for a wider benefit,” the author reveals how he turned a dead banking institution into a successful endeavour benefiting thousands and ushering him onto the global stage.

In building brands, for instance, the author admonished Nigerians to build businesses that will outlive their generation. Citing the case of the Arthur Guinness family, the author shared the remarkable story of how the enterprise was handed down generations, through vision, faith, values and commitment.

In Leadership Turnaround, the author made a brilliant analogy of the processes in the fractional distillation column of a refinery, and the process that distils an individual from his raw talent into a fine leader. The book likens the Training School set up for Heritage Bank as the refinery. Leadership needs to go through such catalytic cracking to refine the attributes and qualities from the crude form. In setting up the refinery, the author did not settle for an artisanal refinery for quick fixes, with attendant environmental impact.
Rather, he invested in efficient “fractional distillation columns” for human resource, to refine the leaders he needed to run the organization, prosper and hand it to the next generation.

Sustainability! He set up a solid training school that reached beyond just banking, to teach etiquette, relationship, social assets, law, and many more. He wanted well-rounded leaders.

Leadership Turnaround stirs up an interesting conversation of globalization and the hybrid form, glocalization.

The author admonished young people to substitute the mindset of globalization with that of glocalization, so they can customize their global outlook to solving local problems.

This is an interesting perspective which I consider very apt for Nigerian youths who want to hit the international headlines, without first making headlines in their local ecosystem. The pathway to global success should be facilitated by the local problems you solve. According to the author, this is what set the likes of Jack Ma apart.

An interesting experience shared by the author in this book, is the revival of the dead bank, Societe Generale Bank.

Reviving a failed bank in any country of the world is never easy. In Nigeria, this is even more difficult. In fact, it could be as difficult as raising the dead. You will need the faithful sisters Mary and Martha, as well as the son of God, all present and joined together in faith, to call “Brother Laz” back to life. And yes, that did happen; not literally, but in some sense. The author and his team (the Mary’s and the Martha’s) apart from the vision, commitment, positive thinking and resources, also relied on faith. Yes, you need faith to dream of getting over 200 bank customers to withdraw their cases in a single day and settle out of court. This account was intriguing, and loaded; albeit, told with such simplicity that demystified what ought to be a complicated success story.

The author reached for examples, case studies and scenarios from different perspectives. He made a lot of Biblical references, not surprising, as a section of Leadership Turnaround was on the role of faith in leadership. In one analogy he cited the power of single-mindedness and unity of purpose, as exemplified in the Biblical tower of Babel, which struck a chord with me. I have often used this analogy while teaching the role of Protocol in Computer Communications and Networks, and it epitomizes the power of a common understanding and mindset. Once a team is united and have a single mindset, it is difficult to defeat them. God identified this in the case of the tower of Babel. The author highlighted this as an important ingredient for success in the corporate space.

The book has several “Take Action” stopovers after each chapter; where readers are refreshed with simplified but impactful action points. The lessons that follow each are drawn from the real world of successful business enterprise. So much was covered in such short space. Some of these include lessons on the complexities of the world of mergers and acquisition; lessons on dealing with soft issues; lessons in Emotional Intelligence; lessons on having the right mindset; lessons on visioning and the kinetics of visioning; lessons in entrepreneurship; the importance of hitting the road, and gaining traction.

In Leadership Turnaround, the author did not hold back on the failings and challenges he encountered on his way up. From his successful revival of SGBN (a massive success by any metric) to the creation of Heritage Bank, and to the quickfire acquisition of Enterprise Bank – which turned to be a poor decision on timing. The author shared these lessons to illuminate the path of the reader, so the mistakes are not repeated. Mistakes are not to be buried and filed out of memory; they can be converted to steps on the ladder on the way to the top. They form part of the script of success.

The author once shared with us the role of chance in the Nigerian business terrain. While I agree with him, I would add that you need to be deliberate to take your chances; as deliberate and measured as he was, and still is.

This is the story told by the author with such candour and remarkable simplicity. I recommend this book to all who seek practical insights into leadership.

Each chapter concludes with Take Action questions and recommendations designed to stir your views and beliefs—setting in motion ideas and theories that need to be explored and acted upon to advance your successful future. Leadership Turnaround may focus on Nigeria—but every person, including youth and mature adults in every nation, can benefit from the wealth of knowledge and wisdom contained within every page of this book.

Olukorede S. Yishau is a journalist of about 22years and have won the prestigious Nigeria Media Merit Awards (NMMA) four times and have been finalist several other times in the Media Merit Awards. He is also Nigeria Prize for Literature nominee, a decorated newspaper columnist, and author of In The Name Of Our Father and Vaults of Secrets