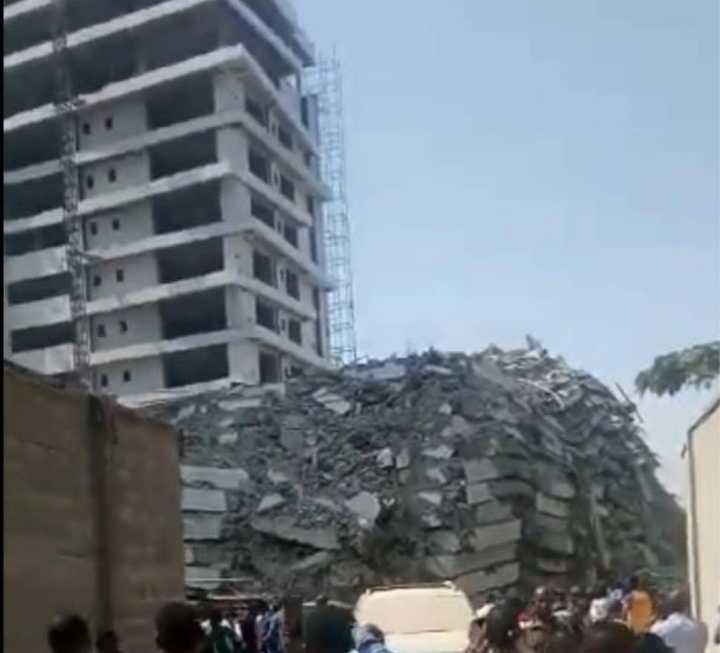 The death toll in Lagos building collapse has increased to 14, the state government confirmed on Tuesday.

The government also said nine men were also rescued alive, adding that more equipment and personnel have been deployed to the site to save more lives.

“Nine persons – all men – have been pulled out of the rubble alive. They have been taken to the hospital. Unfortunately, 14 others were brought out dead – as at 2pm,” the government said in a statement by Commissioner for Information, Gbenga Omotoso.

BREAKING: Riot In Osogbo Over Alleged Killing Of Truck Driver By Police 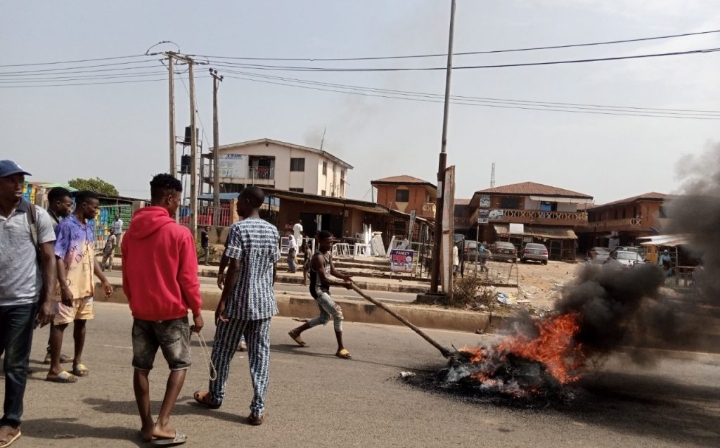 There is currently palpable fear in Osogbo as a Police officer shot a truck driver on Friday morning.

An eyewitness told DAILY POST that the deceased who was driving a Shekeena Global borehole drilling a truck was brutalized before he was shot dead at the Ota-Efun area Osogbo.

The drilling truck, it was gathered, broke down along Ikirun way around 10:30am.

It was gathered that the driver and his crew allegedly blocked the road while trying to fix the vehicle before the police officers reached the place.

An eyewitness said the police officers who came down from a mini commercial bus (Korope) hit the driver with a shovel under the truck before he was shot with a pistol in the chest.

Eyewitnesses said the police officers, immediately after the act, took off their uniforms and ran away.

Police were shooting guns and teargas to scare away the angry crowd, an eyewitness said.

Meanwhile, the corpse of the driver was taken away by the police.

However, the chairman of NURTW Oroki park Osogbo, Adewale Kareem (Asiri Eniba) was on the ground after hours, to pacify the angry protesters and encourage them to open the blocked road.

Efforts to get the reactions of the Police proved abortive as the Command’s spokesperson, SP Yemisi Opalola did not answer her phones as at the time of filing this report. 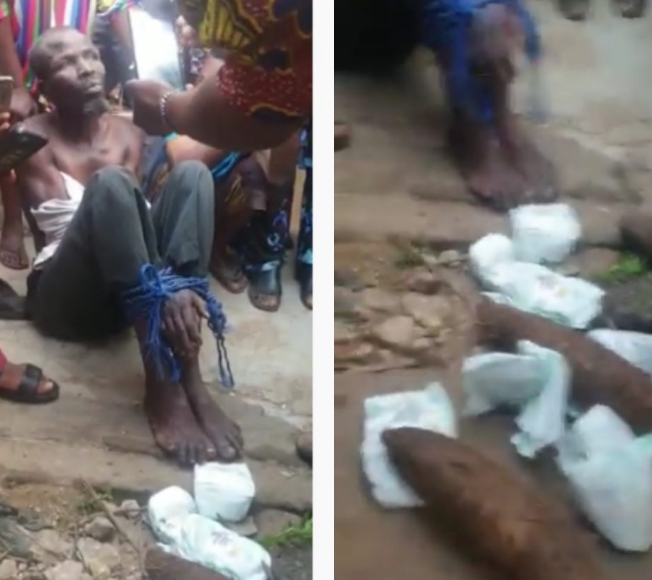 A middle-aged man suspected to be a ritualist has been set ablaze in Ibadan, the Oyo State capital.

DAILY POST correspondent gathered that the suspect, whose name could not be ascertained, was killed and set ablaze on Friday morning.

He was arrested by the angry residents of Ashi, Bodija, and Akobo for allegedly turning two students of Bashorun Ojoo High School into tubers of yam.

The incident occurred at the front of the school.

Sources said that the man was arrested when it was discovered that he turned the students into tubers of yam.

All efforts made by the residents to prevail on him to turn them back proved to be abortive.

The man, according to sources who asked not to be named, was tied with ropes and interrogated.

His inability to provide concrete answers made the angry residents set him ablaze.

The remains of the suspect were later dumped at the front of the school fence.

Our correspondent, who visited the school a few minutes after the incident, observed that the remains of the suspect are still lying on the same spot.

In a video obtained by DAILY POST, the man was tied with roped with two tubers of yam placed before him. It was however unclear if he actually turned the students into the tubers as teachers at the school refused to comment on the incident.

None of the residents in the area was also ready to speak when our correspondent visited the area.

All efforts made by DAILY POST to get a reaction from the Public Relations Officer of the state police command, Adewale Osifeso, also proved abortive as several calls put through his mobile phone were not answered. 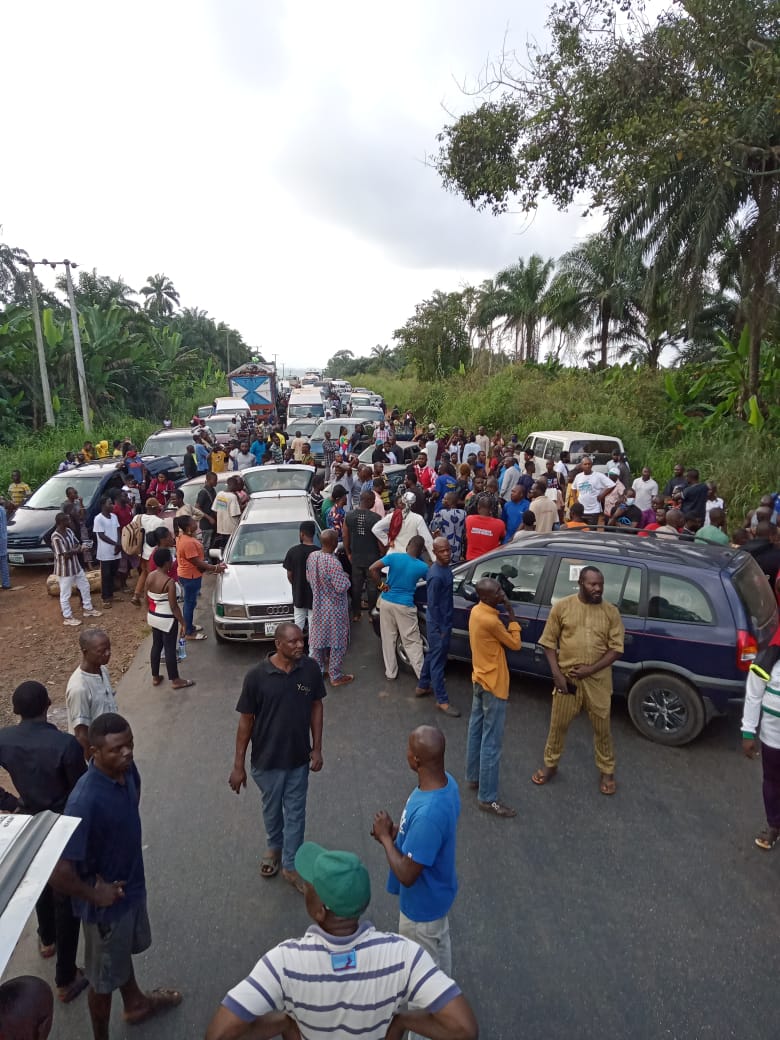 Thousands of travellers were stranded on Thursday on the Benin/Auchi Road as drivers blocked the route with their vehicles in protest against the abduction of one of their colleagues on Wednesday.

The blockade, which took place at the Ugha Community along the road left many commuters lamenting their fate.

One of the drivers said that they decided to block the road to draw the attention of the authorities to their plight, Lamenting that they are constantly abducted by gunmen on the route.

He said: “One of our drivers was kidnapped on Wednesday and we have reported to the police and nothing is being done to search for him. Another one was kidnapped several months ago and we are afraid he may have died as he is yet to be found.

“We are not leaving here until the government do something about it. We brought with us seven bags of rice, pots and other ingredients to cook. That is how serious we are,” the driver added.

A passenger, Collins Aghedo, who was travelling to Abuja, stated that the passengers have been stranded for hours as the drivers were bent on drawing the attention of the authorities to their plight.

“It has been very tough since morning. Getting stuck in place without knowing what will happen is a harrowing experience. We hope that everything will be done by the police to come to our rescue,” he added.

However, the Spokesperson of the Edo State Police Command, SP Kontongs Bello confirmed the incident and said the police were at the venue of the protest to pacify the driver after which their men continued the bush-combing which started on Wednesday.

A statement on Thursday by the PPRO titled, ‘Rescue of kidnapped victims’, reads: “On the 01/12/2021 at about 20:52hrs, operatives of the Edo State Police Command, acting on credible information from Obagie Vigilante Chairman, revealed that armed bandit suspected to be kidnappers numbering about 20, intercepted a Galaxy Bus with Reg No. JJT 989 FC along Benin-Auchi Road by rubber plantation/ Ugha slope with nine passengers enroute Uromi Edo State from Ibadan Oyo State.

“On receipt of the information, the DPO Ehor division CSP Ben Alpha swung into action, mobilized police operatives in collaboration with military and local vigilante for bush combing and rescue operation. In the process, six victims were rescued unhurt, four male and one female and a baby. Bush combing is still on going with the aim of rescuing the remaining four victims and further arrest the suspected kidnappers,” he added.