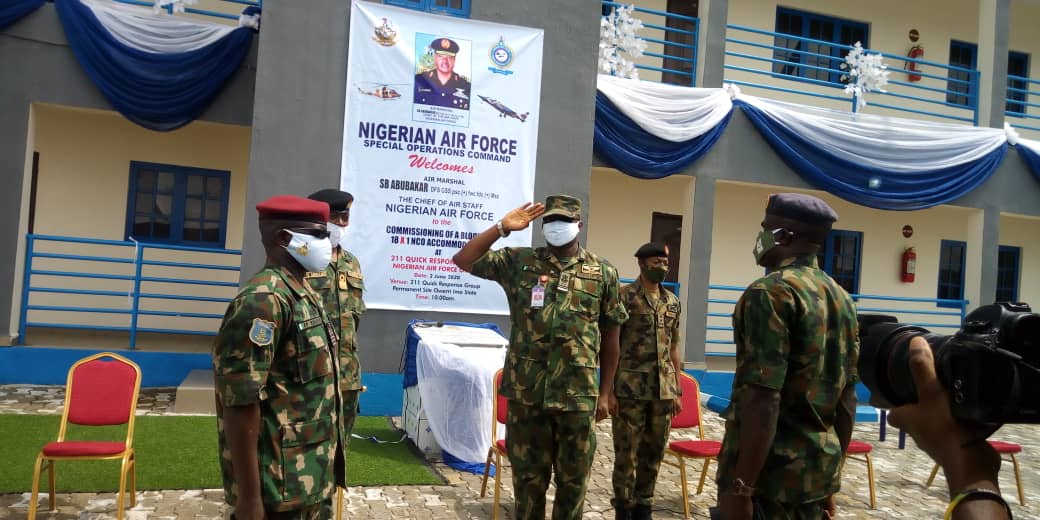 Commissioning the complex, Abubakar said that the complex was an imperical demonstration of the NAF’s resolve to achieve the principal objectives and tasks of the 211 quick response group.

He also said that decent living conditions was imperative to aid officers in the discharge of their constitutional duties.

Abubakar added that the complex which is sited close to the Sam Mbakwe International Cargo Airport will serve to further ensure the security of passengers and staff of the airport.

He thanked President Muhammadu Buhari for his unalloyed support to the NAF as he pledged continued commitment to the protection of lives and property of Nigerians.

He also thanked Imo State governor for creating the enabling environment for the operational activities of the NAF in the state, while assuring the him of continued synergy for the overall interest of Imo citizens.

” I have no doubt that the 211 quick response group has contributed alot in the fight against various forms of criminality bedevilling the state.

” I must thank Pres. Muhammadu Buhari for his unalloyed support in equipping the NAF and I pledge our continued commitment to the discharge of our constitutional responsibilities.

” I also thank Gov. Hope Uzodinma and the good people of Imo for the good working environment . I urge the residents to remain law abiding and assure you of improved security of lives and property “, he said.

READ ALSO: JUST IN: Many Feared Dead As Storey Building Collapses In Imo

Earlier in a welcome address, the commander, 211 quick response group, Owerri, Grp Capt. Elisha Bindul, said that the provision of the complex was part of efforts to enhance the collective operational capacity of the NAF in Imo.

He thanked the CAS for his support which he described as “quintessential” in containing incidences of insecurity.

He however assured the government and people of the state of NAF’s commitment to the welfare of its personnel saddled with the responsibility of combating criminality in Imo and the southeast at large.

” It is imperative to note that decent accommodation is necessary for improved output and we thank you sir for your quintessential support. It is indicative of the bold efforts of the NAF to expand and cater for the welfare of its personnel.

” The accommodation will motivate the personnel to put in their best for the enhancement of our operational capacity and for the attainment of the Nigerian Airforce objective.

” I assure you of our commitment to provision of support to the civil authorities in the fight against criminality in Imo and the southeast at large “ , he said.

The event was witnessed by the Commander, 34 Artillery Brigade of the Nigerian Army, Obinze, Owerri, Brig. Gen. Yusuf Tukura and management staff of the Sam Mbakwe Airport.