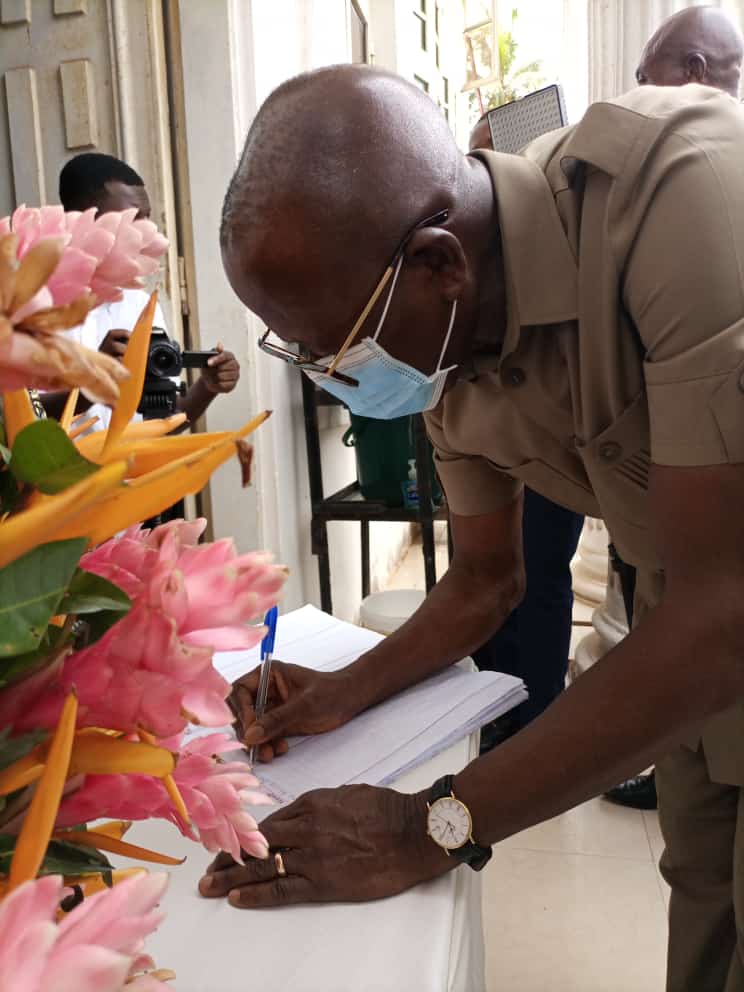 Former national chairman of the All Progressives Congress, Comrade Adams Oshiomhole, has described late music maestro, Sir Victor Uwaifo, as a man who used his talent to take Nigeria and Edo into the international community.

The immediate past governor of Edo State who paid a condolence visit to the residence of the late Uwaifo on Thursday in Benin, said he was an intellectual who tried to bring to reality his thoughts in music and the arts.

The former National Chairman who was accompanied by chieftains of the APC in the state said “there are many ways in which he affected my life. As a young men in the typical rural village where there was no light, no road, anytime we want to listen to music, we make request through Radio Nigeria. We listen to radio using battery, the number one record we always request was Victor Uwaifo; Guitar Boy, Joromi and others and we will wear our small knickers and dance and then were stories about the exploits of Uwaifo in the music world.

“In this part of the world and at that time, the man who forcefully put Nigeria, put the face of Edo on the world map was Sir Victor Uwaifo by his own creativity, his talent and his industry. You cannot resist the music.

“We always pray that God give us long life and good health, because you can live so much and become a vegetable; one is not dying, one is not living. We thank God that he came in the manner he did and he left without being a burden to the family.”

Narrating his experience with the late Uwaifo when he was governor of Edo State, Oshiomhole said “as a steward at Osadebe Avenue, he will always be there even as a guest but sometimes I will tell him, ‘sir the people want to hear your voice even though he wasn’t invited to play’, he will oblige us.

“He was the original musician; in his days, you have to master good English language; you have to have a natural good voice, not digitally aided and shopped, you have to either have it or you don’t. The voice of Uwaifo was not the result of manipulation of modern gadgets, it was a natural gift that God gave him and his music has meaning. When you listen, beyond the entertainment, you also pick a lesson.

“Uwaifo was an intellectual. Beyond music, Uwaifo was always busy, if he can think it through, he will try to create and translate it. Edo people and Nigeria have lost an elder statesman and I am happy that President Muhammadu Buhari acknowledged this fact that Uwaifo is one of the few artistes that succeeding heads of states and presidents recognised and invited to state functions.”