Edo Civil Society Organisations (EDOCSO) says no security personnel under whatsoever guise has right to torture or victimise any citizen of the the country.

Coordinator-General, EDOCSO, Comrade Agho Omobude, gave this revaluation on Saturday in Benin City while embarking on a sensitisation rally on the existence of Administration of Criminal Justice Law (ACJL) of Edo State and the protection it provides for an average Edo citizen.

The enlightenment rally which was supported by CLEEN Foundation took members of EDOCSO to some major streets within the popular King’s Square, Benin.

Enlightening the public further, Omobude said under the ACJL, no security personnel has right to beat or harass any citizen just because such citizen is under detention, stressing that being in detention does not deny such person his or her fundamental rights as citizen of Nigeria.

While disclosing that ACJL gives security agencies power to arrest and investigate, Omobude noted that the same law restricts them (security personnel) from beating, harassing anybody either in the detention or under any condition, adding that this, the same security agencies do not want Nigerians to know.

He said, “Administration of Criminal Justice law says no security agent has right to beat or harass anybody either in detention or the person is carrying tattoo on his body, or have any haircut. The law forbids them (security men) from searching your phone. The law says no citizen should be under detention for more than 48 hours. If they do any of these to you, take them to court, they will pay for it.

“As a citizen of this country, you are the highest office holder. This is what the law stipulates for you, so you must be aware of this law. I am aware and I know that security agencies do not want you to know about this law that had been passed into law since 2018, and that is why we are out here to enlighten the citizens.”

The Coordinator-General advised those who have knowledge of the ACJL to reach out to members of the public on how they can access and activate the law for their own benefit particularly in terms of protection.

On her part, Annie Iroro, Deputy Coordinator-General, EDOCSO, said the organisation has been holding meetings with stokeholders on the need to fully implement the ACJL, stressing that though some are claiming to be complying, the compliance is very low hence the rally to enlighten the public.

Iroro noted that there are basic things all citizens need to know about the law which according to her are in favour for the average man and also provide protection to him. 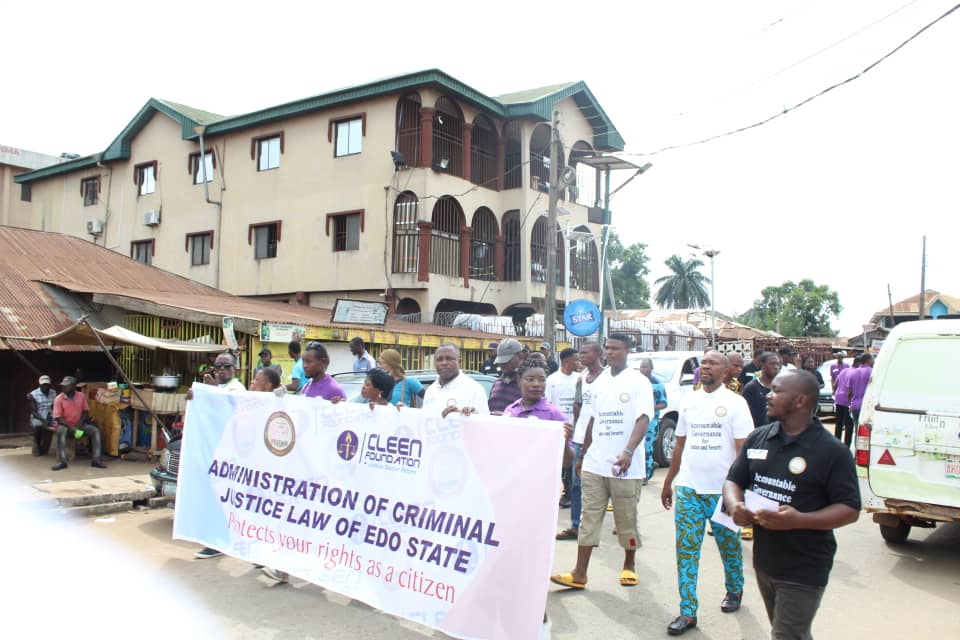 She said the full implementation of the ACJL is a process that need to be followed, adding that EDOCSO is on the front banner until it is fully implemented and all security agencies comply.

The Independent Petroleum Marketers Association of Nigeria (IPMAN) Suleja/Abuja Unit, on Sunday, threatened to embark on an industrial action over alleged extortion by officials of the Department of Petroleum Resources...

Nollywood Producer, One Other Arrested With Guns In Delta