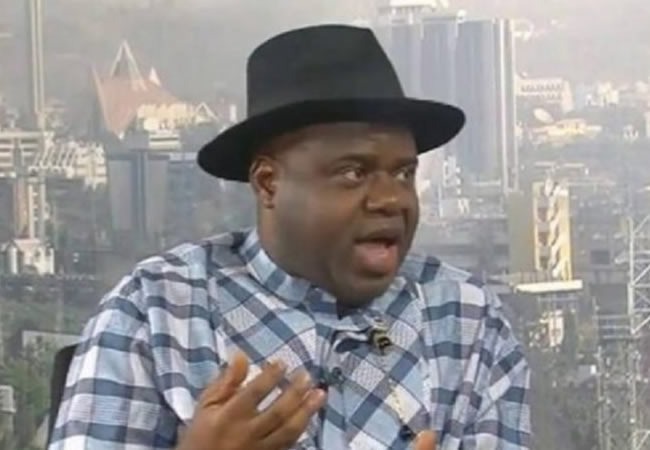 Governor of Bayelsa State, Douye Diri, has announced donation of the N 40 m awarded by the Supreme Court to him and his deputy , Mr Lawrence Ewhrudjakpo , to the church to promote the work of God.

A statement by his Chief Press Secretary , Mr Daniel Alabrah, while disclosing that the governor said this during a special thanksgiving service at the King of Glory Chapel , Government House, Yenagoa , on Saturday, noted that Diri also said it will take him about three months to appoint people into the state executive council.

On the N 40m donation, Diri said he took the decision to donate the money without consulting the deputy governor.

According to Punch, he assured the people that those to be appointed as commissioners would enjoy autonomy in awarding of contracts while he and his deputy would perform supervisory roles.

He appealed to the people of Bayelsa State to be patient with him to “ assemble a crack team that would drive the three- point agenda of the Consolidation Government. ”

Diri, who was full of gratitude to God and Bayelsans for their support and prayers, described Wednesday ’ s Supreme Court review verdict as “ an act of God that became a reality through the wisdom and courage of the apex court . ”

Punch quoted the governor as saying, “What has happened only proves the fact that there is a God that rules in the affairs of men . His decisions are final and supreme . There is no Supreme Court greater than the Supreme Court of God .

“He gave that judgment through the learned justices and some people felt they had to question Him . And God spoke through that woman that delivered the judgment. According to her , who are you to question the supremacy of the Supreme Court ?

“ And so for desecrating the temple of justice, a cost of N10 m each was imposed on two of the senior lawyers that represented the other party to be paid to three of the respondents , which included me and my deputy . Without even consulting my deputy, I have decided that both of us will surrender our N20 m each , that is N40 m , to the work of God in the church . ”

He underscored the need for the opposition APC in the state to embrace the olive branch extended to it for the sake of peace and sustainable development of the state .

He , however , said that intelligence report at his disposal indicated that some opposition elements were still bent on fomenting trouble over the victory of the Peoples Democratic Party at the Supreme Court.

Diri warned them to desist from all unwholesome activities as his government would not hesitate to deploy the full weight of the law to maintain peace and order in the state .

He added , “ As a people, let us learn to move ourselves upward. We need to build on the prevailing peace in this state so that investors can come in and we can also create employment for our young ones who want to work.

“ That is why we have offered the olive branch and we expect them all to accept it. But for those who refuse to accept it, but rather are planning evil , they should realise that we are now on the seat of power . We have information at our disposal. ”

Olanipekun: Truth About Bayelsa Government Will Soon Be Revealed