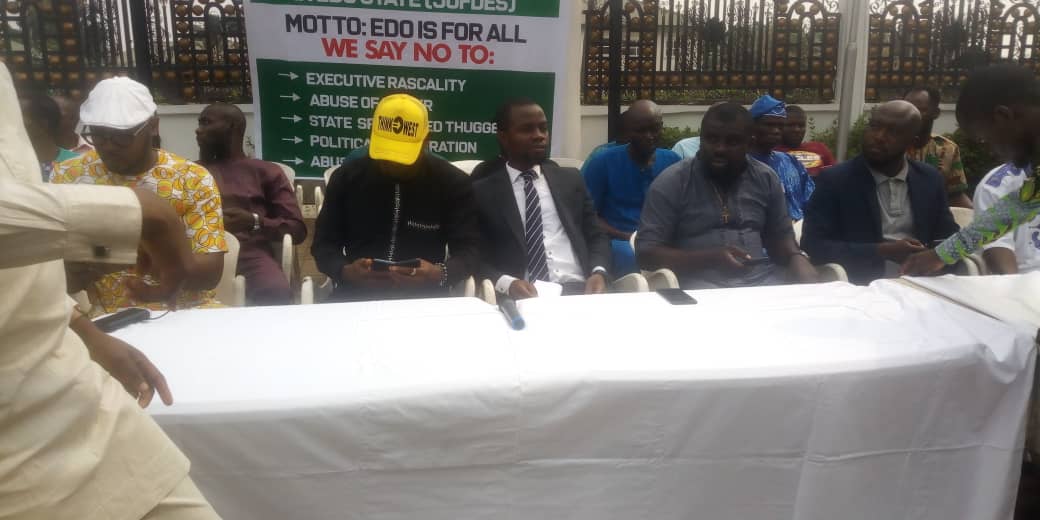 Group known as Joint Forces for the Defence of Democracy in Edo State (JOFDES), has vowed to resist act it tagged “arrogance, unrestrained impunity and gross abuse of office” by the governor of Edo State, Mr. Godwin Obaseki.

JOFDES further vowed to resist any attempt by the “Governor to use his office to continuously incite political violence, harass members of the APC who he perceives are enemies and not in support of his second term ambition.”

A statement signed by co-conveners of the group, Barr Felix Osemwengie Isere, Esq, and Kola Edokpayi, which was delivered by Isere said Obaseki, being governor, does give him the sole power to decide people’s fate.

The statement titled: ‘Governor Godwin Obaseki Orders a Total Clampdown on APC Opposing Voices in Edo State and the National Chairman of the Party: President Buhari Should Save us From a Full Blown Doctorship’, Isere notes that the ‘unnecessary creation of the illusion of political tension in the state is to blackmail Comrade Adams Oshiomhole and every other aspirant.”

He said, “The obvious goal of the unnecessary creation of the illusion of political tension in Edo State is simply to blackmail Comrade Adams Oshiomhole and every other aspirant in Edo State and prevent those willing from pursuing their fundamental human rights of association and assembly and the pursuit of peaceful and lawful ambitions.

“We wish to uphold that being governor does not vest in anybody the suzainreity to decide the fate of others and put them under any duress to support him. Politics is ability to persuade and convince people to support you. Political support is not gotten by force or blackmail, but earned.

“We will resist the crass arrogance, unrestrained impunity and gross abuse of office by executive or sponsored agents. We wish to uphold that being governor does not vest in anybody the suzainreity to decide the fate of others and put them under any duress to support him.”

According to Isere, the Governor has “hidden behind an imaginary fight against Godfatherism to seek to muscle every other possible aspirant in the forthcoming gubernatorial elections.”

On the governor’s recent threat to the National Chairman of APC, Comrade Adams Oshiomhole, the legal practitioner declared that the former governor, just like any other citizen of the state, has right to freedom of movement, association and assembly, hence restricting his movement to the state is abuse of his fundamental human rights.

“Comrade Adams Oshiomhole apart from being a former Governor of Edo State and the current and substantive National Chairman of the APC, is a citizen of Edo State who enjoys the inalienable freedom of movement, association and assembly like the Governor and every other person”, he Isere said.

Isere who accused the governor of “promoting thuggery, banditry and harassment of leaders and members of the All Progressive Congress (APC) in the state”, lamented that due to the governor’s intolerance to opposing voices from the party, he has subjected many of the party leaders to asylum seekers in Abuja.

“The Governor, in a desperate quest to get re’-election, has abused the decorum, honour and decency of that exalted office through his reckless statements, threats and directives have promoted barbaric acts of thuggery, banditry and harassment of leaders and members of the All Progressive Congress (APC) in Edo State who he believes are opposed to his quest to retire them from politics and create an exclusive political dynasty for himself in the party where no other person will contest the forthcoming APC primaries in Edo State with him.”

“Paradoxically, the governor has left no one in doubt about his commitment to foisting a political tyranny and imposing a regime of brutal affliction of legitimate and vocal voices in Edo State by his words and actions.

“A number of APC leaders and members are now living in emergency creeks or hibernating as asylum seekers in Nigeria, taking refuge in safer havens such as Abuja, the federal capital territory” he said.

According to him, in the governor’s “desperate quest to get re’-election has abused the decorum, honour and decency of that exalted office through his reckless statements, threats and directives.”

The legal practitioner therefore called on President Muhammadu Buhari, the National Assembly and international community to call the governor of Edo State, Mr. Godwin Obaseki to order “before it is too late.”

Responding, APC spokesperson in the state who is a loyalist of the governor said Oshiomhole is never a man of peace, stressing that his antecedents point to that.

He accused Oshiomhole of causing all the violence experienced in the state of recent.