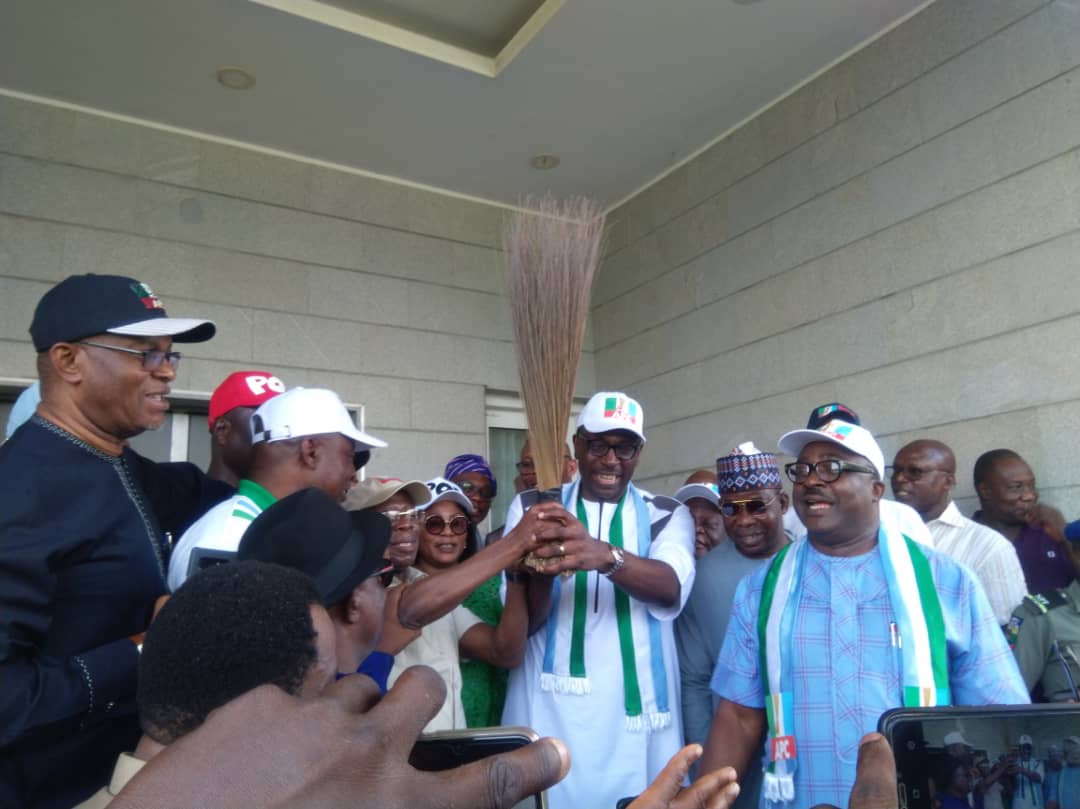 The National Chairman of the All Progressives Congress (APC), Comrade Adams Oshiomhole, has accused the Nigerian police of aiding thugs to cause chaos in the state, saying ‘I’m really ashamed of what happened between yesterday and today.’

He accused Edo State Government of sponsoring thugs to foment trouble by blocking major roads and burning tyre, adding that the plan was to apportion the blame on him should any casualty.

Oshiomhole who addressed newsmen at his house shortly after the rally at Ize-Iyamu’s house noted that taking this into cognisance and knowing well the interior motives of the state government, he decided not to attend the rally which held at Pastor Osagie Ize-Iyamu’s house.

“As national chairman, I have to pay the price by abstaining from going there so that I deny the Inspector General of Police and the Edo State Command any excuse to go and  kill people and blame it on me. We will not go to their level; blood for blood is not our mantra.

“So, once our members are united, I am comfortable, but we will sustain the path of peace and that was the only reason I opted not to attend the mega rally today. They have already planted a story today from the government house that I am under house arrest.

“The shame, however, is that those who have responsibility to provide security decided to create security challenges.

“Look at what happened at Airport road yesterday. Just because I was coming to the state, the state government sponsored thugs to barricade the roads burn tyre? How do you want owner of that Audi car that was burnt feel? This is a voter that has power to vote against us tomorrow and not a politician, so why burning his car.”

“Thugs were burning tires on the road and security men were there looking at them. I personally wrote a letter, signed it and handover it to the Inspector-General of Police (IGP), notifying him of this rally, only for me to hear that this same IGP has cancelled the rally. I didn’t use PA, I didn’t use SA just to avoid communication gap, so I will want to know from the IGP and the Edo State Command what went wrong”, he added.

The former governor of the state posited that if at all there are differences among party members, the best way to iron such out is to have a round table discussion and not the ways things are being done, stressing that such method have been applied but the state government has refused such ‘all-inclusive meetings.’

He said, “My position is that the way to iron differences is to sit down with various sides of opinion  within the party; listen to those who have complaints and weigh the ones that are valid; share with them how you will  address them; the ones that are not valid, then explain why they are not. This is what we have been working on but the governor has consistently refused to attend an all-inclusive meeting.”

The National Chairman of the APC however expressed satisfaction that the party held a peaceful rally despite the security challenges, stressing he concern is to make sure ‘the house of the APC is in order.’

“We are happy that in spite of everything APC had a successful rally that was peaceful and it achieved its purpose. As I stand here now, I am taller now than I was just yesterday because we have harvested to our party people who were part of the foundation of APC; those who participated in the negotiations for the merger, not only have they returned home, they have also used their connection in the other party they were in to move people to join us”, he said.

In his part, Pastor Osagie Ize-Iyamu declared that he was not in the APC to cause more division or chaos, rather he has come to the party to unit it the more and add value to it.

While thanking all that attended the rally, he expressed dismay that the state government could threaten to revoke his Certificate of Occupancy for organising a rally inside his compound.