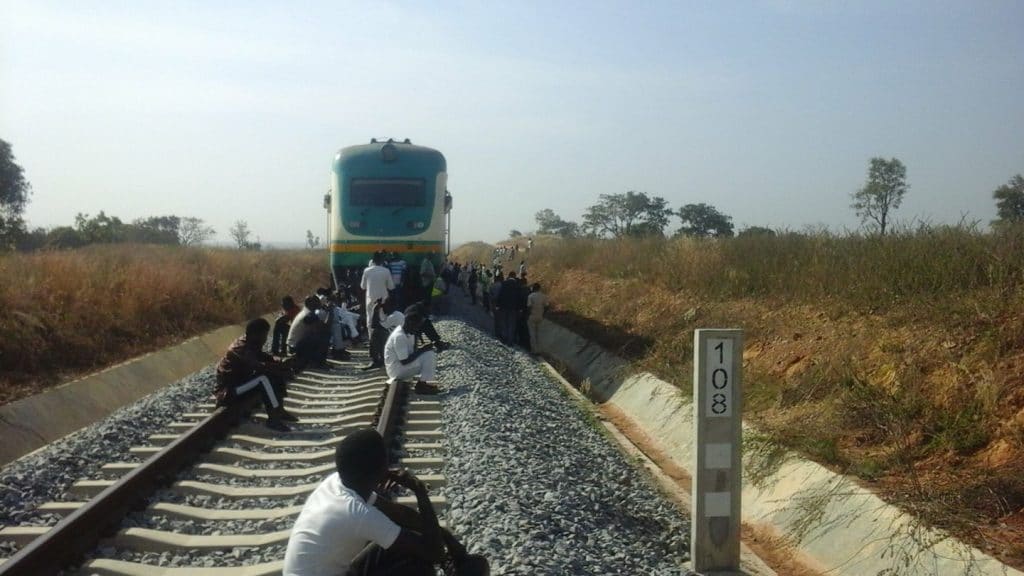 Families of the remaining 51 Abuja-Kaduna train attack victims, on Friday, vowed to occupy key government facilities in Kaduna and Abuja over the government’s insensitivity to their plight.

Severely, the bandits had threatened to kill the victims if the government did not respond to their demands.

Few days ago, one of the victims was shot, sending a signal to the government that killing them was not difficult.

Following this, families and friends of the remaining victims, in a statement by their spokesperson, Dr Abdulaziz Atta expressed fear of losing their family members, especially with reports of snake bites and gunshot injury the captives were said to have suffered.

Atta, whose aged mother and sister are in captivity, said they were worried about the state of health of the captives.

According to him, “as it stands, there are no antibiotics, nobody to remove the bullets from his body, just imagine the current situation he will be in the bush”.

He said although the government was responding positively, as 11 of their loved ones have been released, it should hasten the release of all other abducted victims.

The statement, while appealing to agents of government involved in the negotiation to speed up the process, reminded them that, “we have kids as you have heard earlier on as young as three years old and from the feedback we had, these kids are unattended to. We have women injured, we have aged women and men, those people should be brought out.”

Advertisement
Related Topics:Abuja-Kaduna train
Up Next

A 32-year-old commercial driver, Idowu Ali, has been remanded in the Oke-Kura Custodial Centre, Ilorin, Kwara State, for allegedly hacking a two-year-old boy, Godwin Ifeanyi, over a disagreement with his parents.

Ali was dragged before an Ilorin Magistrate’s Court over offences bordering on criminal trespass, causing of grievous harm and attempted culpable homicide

The offences, according to the prosecution, are punishable under sections 348, 248 and 229 of the Penal Code Law of Kwara State.

A First Information Report said, “On June 14, 2022, around 2.16pm, the case was transferred from the divisional police headquarters ‘C’ Division, Oja Oba, Ilorin, Kwara State, to the Criminal Investigation Department for discreet investigation.

“That on June 8, at 10am, one Emmanuel Ifeanyi, reported at the ‘C’ Division Police Station, Ilorin, that on June 7, 2022, around 11.15pm, he was with his family sleeping at the corridor of his house, which is upstairs, when suddenly one Idowu Ali, climbed upstairs to challenge him over a domestic matter and left in anger, only to return a few minutes after with a cutlass in his hand and forcefully kicked the door of his house open and with the cutlass in his hand, approached him and his family.

“The said Idowu Ali, who aimed to behead Godwin Ifeanyi, the complainant’s son, incidentally cut the leg and almost severed the leg from the ankle of Godwin Ifeanyi, aged two and half years old, who was sleeping on the floor.

“Emmanuel Ifeanyi further stated that while he was trying to collect the cutlass from the said Idowu Ali to prevent him from further harming his family members, Idowu Ali used the cutlass to attack him and cut his right thumb. Immediate police action led to the arrest of Idowu Ali.

“Investigation conducted at the CID, Ilorin, revealed that the genesis of this incident was that the son of Idowu Ali, Alameen, 10, was beating one Munachi, the son of Emmanuel Ifeanyi, and this degenerated into a misunderstanding between both parents.

“During a discreet investigation, you, Idowu Ali, confessed that your wife called you on phone that Emmanuel Ifeanyi, popularly called Baba Ibo, and his wife were beating her and you told your wife to wait till you return from work in the evening.

“When you returned from work in the night, you forcefully trespassed and kicked the door of Emmanuel Ifeanyi, aka Baba Ibo’s house open, and challenged him as to why he and his wife beat your wife and that Baba Ibo pushed you, which made you return to your house to pick your cutlass and went back to Baba Ibo’s house with the cutlass and severed Godwin Ifeanyi’s right leg from the ankle.”

When the case first came to the court for hearing on June 17, 2022, lawyer to the defendant, G. T. Olumo, filed a motion seeking the release of the accused person on bail.

However, the magistrate, Mr I.A. Dasuki, demanded the condition of the child, who was admitted to a hospital.

Counsel for the victim’s family, Onwa Ifeanyi, said parents of the victim had been approaching individuals and the Igbo community for financial support to treat their child.

The counsel said the state Ministry of Justice had also filed a charge against the accused before the state High Court.

The court adjourned the matter till August 29, 2022, for hearing. 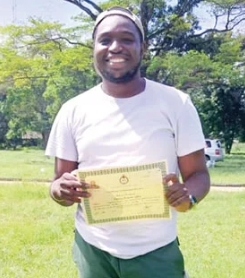 Family members and friends of a petroleum engineering graduate of the University of Benin, Edo State, Jeffrey Omoregie, have been thrown into mourning after a driver crushed him to death on Uselu-Lagos Expressway, Uselu, in the Egor Local Government Area of the state.

It was gathered that Jeffrey was on his way to a Union Bank branch to wait for his mother, who wanted to make cash withdrawal from her bank account.

It was learnt that the mother intended to give him some money after he concluded plans to travel to Canada for his master’s degree programme.

The 26-year-old, upon getting to Uselu Junction, attempted crossing the expressway to connect to the bank when the yet-to-be-identified motorist, while driving a Lexus car with number plate YAB 985 CL at top speed, rammed into him.

Jeffrey’s mother, Fortune, who spoke to one of our correspondents on Thursday, said she was inside a vehicle conveying her to meet her son when she observed people clustering around an accident victim.

She said, “I got down and started telling people to let us help the victim. But on moving closer, I realised it was my son lying down in a pool of blood. I started crying and shouting that people should help me. He was still breathing and people helped me carry him inside a vehicle.

“We quickly rushed him to the University of Benin Teaching Hospital, where we were told that he had died. He was to travel out of the country on August 28 and I was going to the bank to give him money for the travel.

“The youth that assisted me said the boy that killed my son is a Yahoo boy (Internet fraudster) and that his vehicle came from nowhere to knock my son down. If you see the damage on the car, you will think that the vehicle rammed into a truck. I want justice.”

The deceased’s younger brother, Aisosa, said the police had been hiding the identity of the suspect.

He said, “On Tuesday, around 3pm, I got a call from my mum and heard her saying help me, help me before the call disconnected. She called back and said I should be coming to the UBTH because my brother had an accident.

“I was on my way to the hospital when she called and said my brother had died. How the accident happened was that he crossed the Uselu-Lagos Expressway towards the barricade that separated the two lanes for vehicles coming and going.

“Policemen from the BDPA division arrested the suspect that same Tuesday. But when my mum and I went to the police station and demanded to see the person responsible for my brother’s death, the Investigating Police Officer told us the suspect had been transferred to the Area Command on Sapele Road.

“When we got there, we only saw the car and they still didn’t show us the suspect or tell us his name. They are just hiding his identity and we need to know his identity because we want justice.”

Jeffrey’s friend, Samuel Ebosele, alleged that the IPO had been trying to compromise the case, adding that some policemen had been calling the family for settlement.

The state Police Public Relations Officer, SP Chidi Nwabuzor, said the case had been transferred by the Divisional Police Officer after initial investigation to the State Traffic Division, Adesua, where further investigation would be carried out.

“I have been in touch with the DPO of Ugbowo, who confirmed that the case had been transferred to the State Traffic Division where further investigation will carried out,” he added.

Troops of the Nigerian Armed Forces operating in the North West and the North Central theatres of operations have eliminated over 45 terrorists/bandits in both land and air operations in the last two weeks.

The Director, Defence Media Operations, Maj.-Gen. Bernard Onyeuko made this known at a bi-weekly news briefing of the Defence Headquarters on Thursday in Abuja.

He said the air strike was carried out during the terrorists meeting on Aug. 8 based on credible intelligence.

According to him, the airstrike led to the killing of Shanono with 18 other terrorists, adding that 30 AK47 rifles and 20 motorcycles were destroyed in the attack.

Onyeuko said as a result of the operations, 45 kidnapped civilians were released.

Onyeuko further said that troops of Operation Whirl Stroke arrested some notorious criminals who had been on the wanted list of the theatre command.

He said Nathaniel Azege who had been terrorising Makurdi town was apprehended as well as Moses Aindigh (27) and Mr Iluyasu Mohammed (37) during the period.

He said the air component of Operation Hadarin Daji had on Aug. 6, carried out successful strikes on key terrorists enclave and hideout located at Rudu forest in Katsina State.

According to him, the air interdiction led to the neutralisation of a high-profile terrorist leader who has been on the wanted list of the military named Alhaji Abdulkareem Lawal (a.k.a Abdulkareem Boss) and his foot soldiers.

“Credible intelligence report revealed that he was responsible for several terrorist attacks, animal rustling and kidnapping and was also known to regularly invite terrorist groups from other areas and regions to join in the attack on his targets.

“Report gathered from the locals revealed that the terrorist leaders were neutralised alongside 27 foot soldiers,” he said.

Onyeuko further revealed that troops had between July 31 and Aug. 2, arrested one Malam Yahaya a notorious bandit informant who had been on the tracking list of the Department of State Security for collaborating with bandits on the numerous attacks in Sabon Brini general area of Sokoto State.

According to him, the troops also recovered 161 cattle, eight camels, a large consignment of clothing from terrorists after an encounter in Zango, Shinkafi Local Government Area.