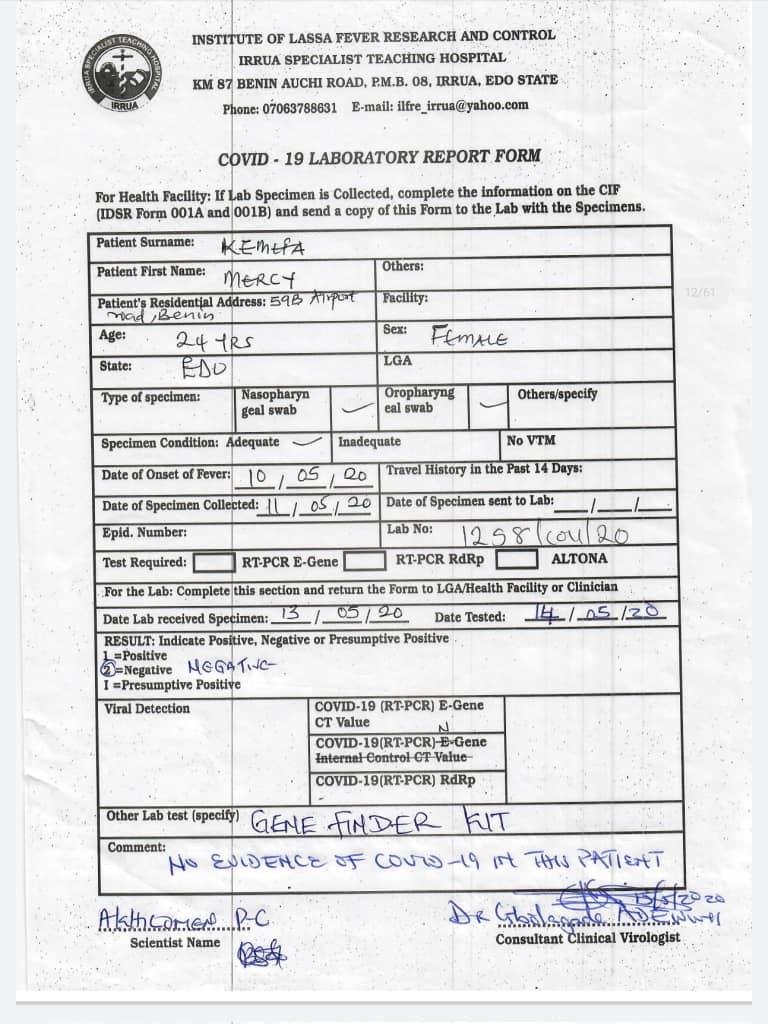 A lady identified as Mercy Kemefa has narrated her ordeal in the hands of Nigeria Centre for Disease Control (NCDC), and Edo government COVID-19 Committee on what she described as “keeping me in an isolation centre for nothing.”

Kemefa, in a video posted online revealed how she was first stigmatised by nurses when she went for a check up in a popular private hospital, Airport Road, Benin, because she had high temperature.

She said despite showing Doctors and Nurses in the hospital results of her previous tests and scannings that she’s a patient of abdominal pains, they insisted that COVID-19 test must be carried out on her, yet they abandoned and distanced themselves from her while she shivered and suffered helplessly on the ground until she was referred to Stella Obasanjo Hospital Isolation Centre, Benin.

“They taught I have COVID-19. They asked what’s wrong with me, I told them what’s wrong with me. I showed them all my scan and test results, yet they insisted that I go for COVID-19 test, and that they will not let me leave, yet, they refused to attend to me. My temperature was very high, I was shivering, they distanced themselves from me, I was highly stigmatized”, she revealed.

According to her, on getting to the Isolation Centre, though there was a little delay, test was carried out on her and her sample was taken to the laboratory with the assurance that the result would be out within three (3) days.

She further narrated that she was promised the next day but when the day came to no avail, lamenting that she had stayed in Stella Obasanjo Isolation Centre for good six (days) without any result from her test.

She said, “They brought me here on Sunday, they refused to do the test on that Sunday till Monday. They did the test and took my sample and said the result was going to come out within 3 days which was on Wednesday. Wednesday came, they told me there was delay in the result, and that it was going out on Thursday. I asked for my result on that Thursday and the guy who attended to me said the result was out, but they have not sent it yet, so, I waited till evening yet no result. And today is Friday, I am still here waiting for the result.”

Kemefa further lamented that the response she’s been given when she request for her test result now is that, the laboratory they earlier took her sample to had already full hence they had to take it to another laboratory. This she was not told earlier.

“Now, they are telling me that the laboratory they took my sample to was full, so they had to transfer my sample to another laboratory. I have been kept here for good six days and my result is not out. This is what is happening in Stella Obasanjo Hospital. They are just keeping me here for nothing and I don’t know why”, she lamented in the video.