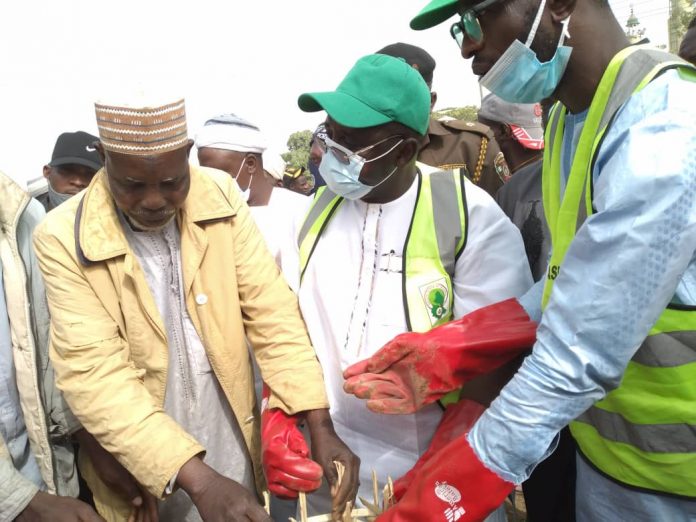 Hon. Hamisu Shira, Bauchi state Commissioner for Environment and Housing has called on the people of the state to cultivate the habit of planting trees in order to curb desertification and other environmental challenges.

The commissioner made the call in Bauchi on Saturday during the launching of a tree planting campaign in Sabon Kaura, a community in Bauchi metropolis.

Shira, while launching the planting of the 500 units of trees in the area, expressed the state government’s resolve to support all the communities in the state to engage in such exercise.

“The state government will assist people of the state with seedlings and other facilities in order to encourage tree planting to ensure a conducive environment for people to live.

“We are willing to provide the seedlings to people in all the senatorial zones to fight desertification and other environmental issues. We have so many plans for our environment to be safe for all of us,” he said.

He applauded the people of Sabon Kaura for engaging in cleaning of their environment, especially, drainages and called on other communities to emulate them.

“We are here to appreciate this community for embarking on cleaning their drainages out of an appropriation of what the government did to them. I want to call on other communities where roads are being constructed to emulate this gesture to keep the environment a healthy and conducive one for people to live,” said the commissioner.

In a remark, Dr. Ibrahim Kabir, the Director General, Bauchi State Environmental Protection Agency (BASEPA), said tree planting was among the new initiatives of BASEPA and it has reached all the stakeholders to ensure the set objectives were achieved.

“It is very encouraging the level of commitment of people of this area to environmental protection, we are happy with this and we are ready to support you”. Said the D-G.

Earlier, the District Head of Miri, Malam Husaini Othman, said the communities of Sabon Kaura have embarked on sanitation exercise of their environment in appreciation for the road project provided in the area by the administration of Governor Bala Mohammed.

Othman appreciated the governor for the gesture and pledged to safeguard the road from collapse through various community initiatives.

ABOUT US
Info Daily is published by Info Daily Media. We are poised in bringing to your reading pleasure happenings from the entertainment, politics, music, sports fashion, etc world. Do you, however, want us to cover and publish your social (wedding, house warming, graduation, burial,etc), political, religion among other events? Fill free to contact us @ contact@infodailyng.com. Breaking news for us in your area? Contact editor@infodailyng.com
FOLLOW US
© Info Daily Designed by