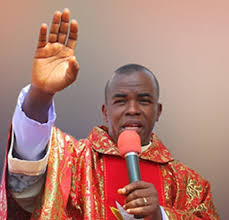 Popular Catholic Priest and Director, Adoration Ministry, Enugu, Rev. Fr. Ejike Mbaka, has come under heavy criticisms for prophesying on the Imo governorship judgement between incumbent governor, Emeka Ihedioha of the Peoples Democratic Party and the All Progressives Congress candidate, Senator Hope Uzodinma that is pending at the Supreme Court.

Several groups and individuals, including the Christian Association of Nigeria (CAN), the National Youth Council of Nigeria, NYCN, and Bishop of Umuahia, Bishop Luscious Ugorji, while critisizing the Priest noted that Fr. Mbaka has not only delved into fortune telling, but commercial prophecy.

Fr. Mbaka had in his New Year message predicted that the governorship candidate of APC, Senator Uzodinma, would take over from Hon. Ihedioha as Imo governor, making many to believe that he presumed the Supreme Court judgment would be in Uzodinma’s favour.

YOU MAY ALSO LIKE:One Killed Scores Injured In Communal Clash In Bayelsa

Chairman, Christian Association of Nigeria (CAN), Imo State, Senior Apostle Godson Ibeji, while dismissing the prophecy of Fr. Mbaka over the outcome of the pending Supreme Court judgment, noted that such prophecy does not hold water, wondering why a matter before the highest court in the land would be tossed around.

The Chairman in a statement said CAN has consistently kicked against such prophecies tailored to suit the whims and caprices of politicians.

“CAN has consistently opposed such politically motivated prophecies and at the same time strove to maintain the dictates that guide and regulate the practice of Christianity.

“We will continue to toe this path until we restore sanity in the practice of priesthood,” he added

Also reacting, Bishop Luscious Ugorji of Umuahia Catholic Diocese and the Apostolic Administrator of Ahiara Diocese, said the Catholic Church which Mbaka belongs to as a priest, is not into fortune telling, thus does not give authority to any priest to make predictions on who wins a court case or not.

His words: “The Catholic Church is not into fortune telling and so does not authorize any priest to make predictions on her behalf on who wins a court case.

“Anyone who speaks on such a matter is expressing his personal opinion”.

The prelate said he does not give attention to such predictions, as they are mere guesswork, saying “in a true democracy only those who win elections have the mandate of the populace to rule.”

Bishop Ugorji therefore advised Imo people not to rely on such guesswork coated in the name of prophecy, but rather pray that their choice as governor with their mandate wins at the Supreme Court.

The NYCN, Imo State chapter, in a statement issued by its President, Isdore Chukwuemeka, in Owerri advised Mbaka not to set the political landscape in the state on fire and leave Governor Ihedioha alone, stressing that the incumbent was massively voted for by the people of Imo.

He also queried where Mbaka was during the eight years of the destruction of the state by the immediate past APC administration headed by Senator Rochas Okorocha.

“We advise Fr. Mbaka to leave Governor Emeka Ihedioha alone. The youths of Imo State are pleased and satisfied with the Rebuild Imo administration.

“Governor Ihedioha barely seven months in office has restored the years the locust had eaten for eight years in the state.

He said Mbaka has always directed his prophesies on Imo political leaders who he does not like with the underlying motive to cause confusion in the state, noting that “we cannot remember when he prophesied on political developments in other states.

YOU NAY ALSO LIKE:‘A Third Party Has Not Settle Querrel For Us In Our Marriage Of Over 40years’ – Octogenarian

NYCN, therefore, advised the cleric to stop mixing politics with religion, and do not allow politicians to sway his opinions.