A 26-year-old man has been sentenced to 3years imprisonment by Benin Magistrate Court for vandalising equipment belonging to the Benin Electricity Distribution Company (BEDC) PLC.

The judgment was delivered by Mrs. E.A Aghedo at Egor Magistrate court last Wednesday, January 7, 2020, after the accused pleaded guilty to the charges.

The accused, David James, was charged on a two-count charge of stealing armoured cable wires and three transformer bushes spindles both valued at about N500,000. 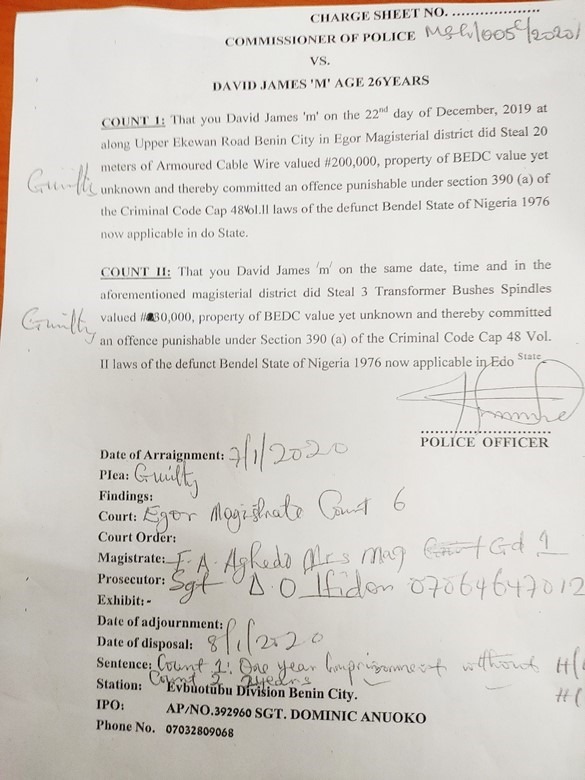 The accused who confessed to have committed the crime, said he wanted to sell the vandalised items before he was arrested by men of the Nigerian Police.

In a confessional statement given to the police, James who said he was not a first time offender, disclosed that the vandalised items were usually sold to dealers in scrap items, adding that he has been to prison on account of vandalism.

Management of the DISCO in its reaction noted that electricity distribution network vandalism and other forms of electrical thefts are serious threats to power sector sustainability and economic growth.

While lamenting that vandalism has been major acts negatively affecting service delivery to customers, BEDC noted that revenue that could be used for critical development projects are being used to restore damaged and stolen installation

The United Arab Emirates, UAE, has again announced indefinite suspension of flights from Nigeria to Dubai This is coming barely 48 hours after the UAE announced that it has finally...