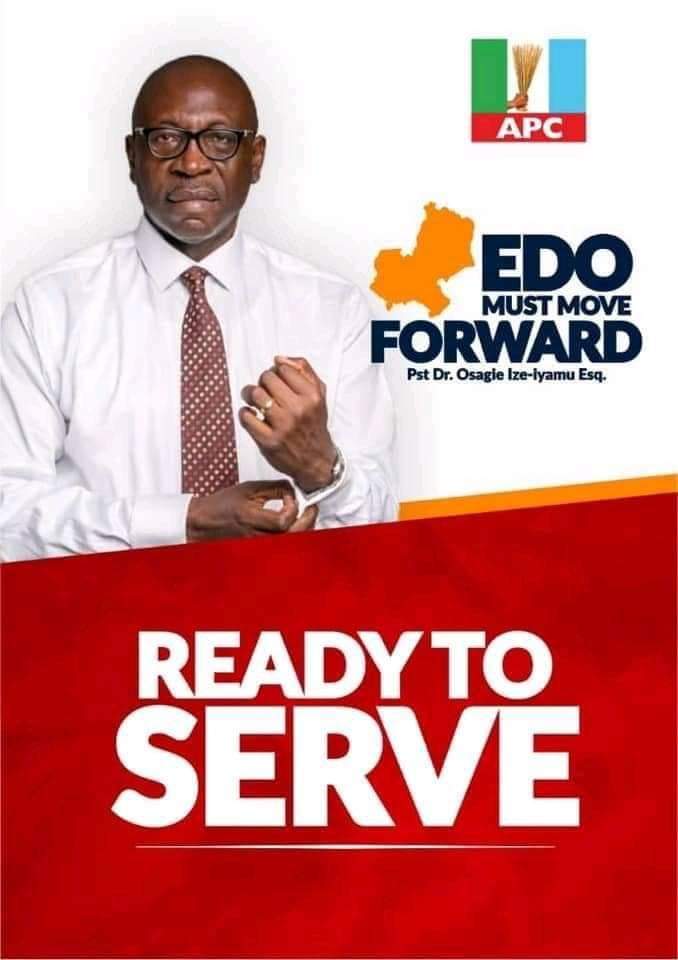 A Benin High Court presided by Justice Emmanuel Ahamiojie, has authenticated the membership of Pastor Osagie Ize-Iyamu as bonafide member of the All Progressives Congress (APC), stressing that he is qualified to contest in the forthcoming governorship election in the state.

The Judge in his ruling said the issue of granting of waiver is a matter that is subjected to every political party and that it is not for the court to determine who is to be given waiver or who not.

” I hereby declare that the Osagie Ize-iyamu (third defendant) is qualified to contest being a registered member of the All Progressives Congress”, he said

Kenneth Asekomhe,
Benjamin Oghumu, Mathew Ogbebor and Unweni Nosa, had earlier instituted a suit challenging the decision of the All Progressives Congress for granting a waiver to Ize-iyamu, to make him eligible to contest the APC primary election.

Defendants in the suit are the All Progressives Congress (APC), Adams Oshiomhole, and Osagie Ize-Iyamu.

The claimants predicated their case on the ground that any waiver purportedly granted by the National chairman of the party, Adams Oshiomhole without the approval of the National Executive Committee of the APC and without Osagie Ize-iyamu formally applying for such waiver through his claimed ward, local government area is null, void and of no effect.

They prayed the court to restrain the APC from recognising
Osagie Ize-iyamu as an aspirant of the party in its primary election to select a candidate to represent it in the governorship election.

Addressing journalists shortly after the delivery of the judgment, Counsel to the 1st and 2nd Defedant, Victor Ohiosumua, said the Lordship in his ruling said the court has no jurisdiction to dabble into what should be the internal affairs of any political parties.

“You are aware that we took all our preliminary objection and we also took the originating summons. So, both processes were consolidated.

“So your Lordship has considered all the processes filed by both parties and he has come to the legal conclusion and very erudite judgement that he has no jurisdiction in determining who a member of a political party is and this is in line with the litining of cases as your Lordship said basket full of cases in the Supreme Court that membership of political party is an internal affairs of the party.

“So, he has reaffirmed those precedence and said he has no jurisdiction to know who is a member, however, to be on the side of caution, he also dived into the merit of the case assuming I have jurisdiction, is this case worth his while?

” He has come to the conclusion that pastor Osagie Ize-Iyamu is a registered member of APC and he is qualified to contest the primary that was held last Monday.

“So, all issues about membership has now been resolved”, he said.

Corroborating what the Councel to the 1st and 2nd Defedant said, Henry O. Ogbodu, Counsel to — quickly advised that it high time political parties started resolving their problems internally instead of dragging the court into their political squabbles, noting that the court is already over burden with cases.

“The judgement of the court today, basically, pastor Osagie Ize-Iyamu is bonafide member of APC and he is qualified to contest the governorship election on behalf of that party. That is the basics of the judgment today.

“I am absolutely satisfied. Number one, politicians by this judgement, should learn to settle their difference themselves.

“They should learn how not to drag the judiciary into their internal party affairs or political squabbles.

“We have had enough of internal squabbles of political parties. Political leaders should learn how to resolve their difference outside the judiciary and not because we don’t have confidence in the judiciary, we maintain the confidence there but they had better resolve it in order not to heat up the polity.

“Heating up the polity is not of the best interest of the economy either economically or politically. We should grow up”, he added.